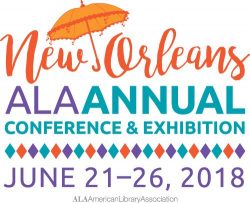 Another year at ALA and the gamers were out in force.

On the Exhibit Floor
GameRT hosted a booth with special guests Looney Labs and Osprey Games. ALA conference attendees could not pass by our booth without stopping to admire the artwork and play a quick game of Get the MacGuffin.

GameRT booth visitors were able to take away two new games for their collections, Get the MacGuffin and a mini Quiddler. The booth was crowded throughout the weekend with librarians eager to talk about their game programs or interested in how to start game programs in their libraries.

The Gaming Lounge was also full all weekend as librarians played games sponsored by Wizards of the Coast, Looney Labs, Konami, Paizo, and Z-Man Games’s upcoming Choose Your Own Adventure Game, House of Danger.

ALAPlay was a packed evening of gaming goodness and programming ideas. A big thanks to Asmodee, Looney Labs, Osprey, and Word Winder for having representatives on hand to showcase games. There was a ton of open gaming goodness covered as well by Tubby and Co’s and the Gulf Coast Gamers. Paizo was demoing the upcoming Pathfinder 2.0 for attendees. Wizards of the Coast and Konami each ran get to learn areas for their Trading Card Games. Rosen was on hand with their fantastic Gaming and Learning resource kits, made in collaboration with HABA. Lastly, we had a robust unpub area, featuring New Orleans local game designers including Jason Dinger’s upcoming Spielworxx title Captains of the Gulf.

Board Meeting
Our group is growing with leadership interest from several new members.  With members from academic, public and school libraries, the Board represents Library gaming in all of its many permutations.  Additionally, the Board has been reaching out to the wider membership to see what sorts of gaming initiatives GameRT should pursue, and have already found some interesting new projects.

Saturday’s board meeting had an excellent turn out from both old and new members alike. We heard reports and updates on the budget, from the ALA Executive Board, and from ALA Council. We then discussed the new committee restructure which was completed in the Spring. The committees for GameRT are now International Games Week (IGW) Committee, Outreach Committee, and Programming Committee. The volunteer form is working again and we are looking for volunteers for all three committees.

Following the business portion of the meeting, we discussed what members would like to see from the roundtable. In order to better engage with membership, it was decided that we will start having virtual membership meetings using Adobe Connect. It was suggested that we have one or two librarians present on an interesting program or gaming related topic, followed by some kind of open discussion. We will host the first one sometime in the Fall, more details will be available later this summer. Full notes from the meeting will be available in ALA Connect.

It was a great conference! We hope to see everyone again at the next ALA Annual Conference in Washington D.C.