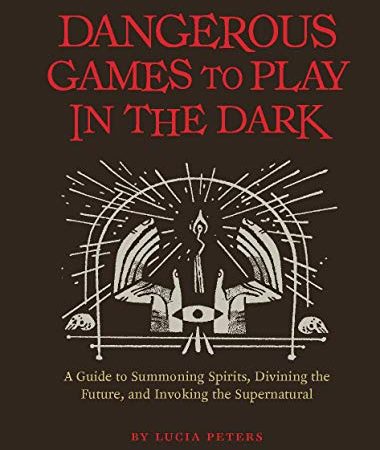 October is the season for celebrating the dead, as memorialized with Halloween, Día de los Muertos, and All Souls Day. Different games have been developed throughout time and across different cultures for fortune telling and communing with the supernatural. Dangerous Games to Play in the Dark by Lucia Peters collects these games from a mix of academic and folksonomic sources. The book includes instructions on how you can play them yourself and the risks you may undertake by attracting the attention of the great beyond. If you’re looking for a thrill, consider adding some of the included games to your spooky festivities.

The book is divided into different genres of games including party games, summoning games, games of knowledge, and more. It includes urban legends from across the world including Hyakumonogatari kaidankai (“the game of one hundred ghost stories”) from Japan- immortalized in books such as Nothing but Blackened Teeth by Cassandra Khaw and the Persona video games, El juego de sara sarita (“the red book game”) from Latin America, and Jelangkung (“the compass game”) from Indonesia. Each game feature includes the risks players take- both mundane (open flames, sharp objects) and supernatural (vengeful spirits)- by participating in them and additional tips such as alternative modes of play for solo players or larger groups.

The introduction closes with these pointed words: “…you might be asking yourself the obvious question: Are the games in this book real? The truth is that there isn’t a simple answer. You’ll have to decide for yourself.”