My husband has played guitar –for fun, not profit–since he was around twelve. He knows how to read music, has played in informal bands, and could care less about being a Guitar Hero; rhythm games just aren’t his thing. In fact, he plays along on his REAL guitar while I strum hopelessly to “I Love Rock N Roll” (he might be mocking me).

While we were browsing at various instrument shops over the long weekend (Daddy’s Junky Music, and then at Guitar Center) I noticed two how-to play books by Hal Leonard, based on popular rhythm games, and thought, wow, a library that added these to the collection might be pretty cool.

More titles in this venue are to follow. Rock Band: Drum Play Along comes out in November 2008 and will have drum notations songs from the hit game, PLUS an accompanying CD with adjustable beat, so you practice at a slower pace, or listen at normal speed to hear what you are supposed to sound like. The book will includes eight songs: 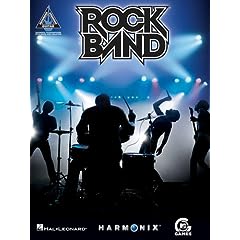 Most of the Hal Leonard books cost around $20. I’ve heard lots of teens say at gaming programs that Guitar Hero inspires them to learn to play guitar, and I’ve heard from librarians that say while they don’t want to do a bait & switch (come in for the games, leave with the books), they are not adverse to softcover titles with relevance, i.e. books on how to play guitar at a Guitar Hero program. So, keep Hal Leonard titles in mind, especially if your library’s fiscal year is coming to a close and you have a little money to spend before June 30.