Here at the Ocean County Library on the east coast of New Jersey, we hold an annual Staff Development Day. This day involves seminars and workshops for OCL staff, provided by both staff members and outside groups. I recognized an opportunity to spread my love of board gaming by showing others how board games can be used to build relationships, even in the workplace. I, along with 4 colleagues, put together a workshop for the staff called “Co-Op Board Games as Team Builders.” Co-operative board games have been around for decades, but I have found that most people are not familiar with the genre. They are perfect to use as team builders, due to the fact that they get people to work together, communicate, share skills, and, most importantly, have fun. I wanted to share our process of creating this workshop, as it is easily reproducible and a great way to introduce others to the excellent games that are being played these days. 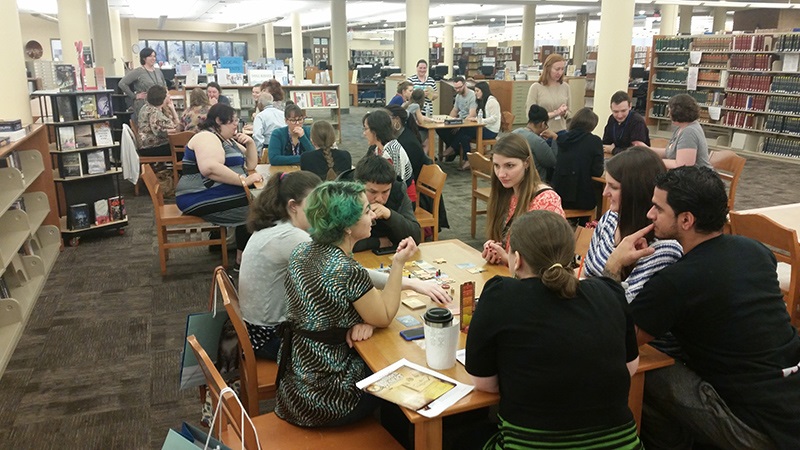 To start, we put together a list of co-op games we were each familiar with. Since we were going to be teaching the games to newcomers, it was important that we knew the rules. We intended to limit the workshop to no more than 25 people, so we looked closely at the number of players each game would accommodate. However, we did not have firm control over the number of attendees, so we allowed for flexibility by including a “party” game”, which could accommodate up to 12 people. We also came prepared with duplicates, thinking that if the need arose, a few of us could run two copies of a game.

After taking into account all of the above factors, we settled on the five following games:

On the day of the workshop, we set the games up well before our start time. As attendees arrived, we allowed them to choose the games they wanted to play, with most selecting a game at random. We talked for a few minutes about co-op games, how they can be utilized at staff meetings or as ice breakers at teen volunteer events, and how they compel people to work together to achieve a common goal. We then explained the rules to each table and the games began.

I was running Castle Panic with a group of staff members from different branches; they did not know each other well. I guided them in the beginning, answering questions and providing basic strategic assistance. But as they learned the game, I was less involved. I stood back and watched them as they talked through each turn, discussing strategies, exchanging cards, and building a story together. There were tense moments as walls were breached and castle towers were destroyed, but in the end, they came together and saved the day.

Throughout the duration of the workshop, it was very obvious that each group was creating their own stories, and having fun doing it; the room was filled with cheers, laughter, and an occasional groan. In the end, some tables won their games, others lost, but it was obvious that everyone had a great time. Afterword’s, I overheard the group that had lost their game of Forbidden Island exclaim “we were so close! Let’s come back and play this at lunch time.” I could not have been happier.

Matt Willbergh is the branch manager of the Pt. Pleasant Beach Branch of the Ocean County Library, located in Pt. Pleasant Beach, NJ.  He and his family have been subjecting everyone they know to the joy of hobby gaming for the past few years.