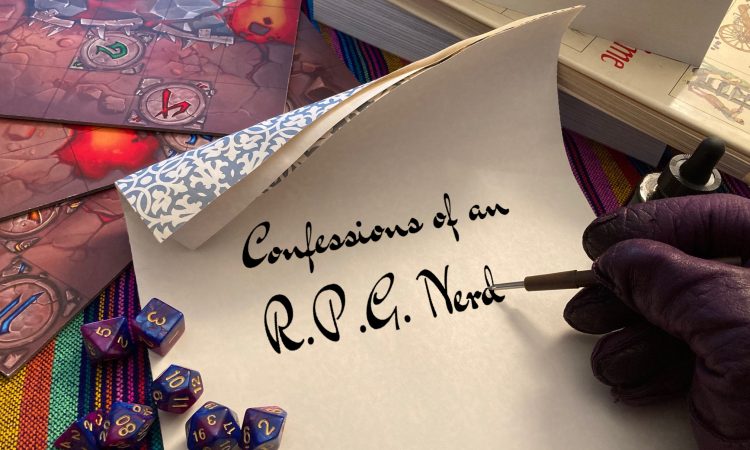 When talking to people about tabletop role playing games, the first thing out of most people’s mouths is “That’s Dungeons & Dragons, right?”  While D&D is the most recognizable name in a universe of RPGs, I am so tired of it.  I’ve been playing D&D since back in the day of AD&D (Advanced Dungeons & Dragons) in the early 90s (I’m old), and I have always found the system and settings problematic.  The system has always had a certain clunkiness, and the class system has always felt restrictive.  The settings have had a lot of bias built in, like certain races are inherently “evil” and therefore unusable by the players, and the settings aren’t cohesive unless you have read every source book and tiny piece of fiction from the beginning.  While things have improved over the years, and a major overhaul of the bias issues is in process (THANK YOU WoTC!), I am still not the biggest fan.  But, since this is the most immediately recognizable and easiest game to find for most people, I run lots of D&D 5th edition programs.

To combat some of my issues with the settings that grew with D&D, I have been on a quest for new and exciting settings that use the D&D 5e rules.  Now I can have settings that have a cohesive history, are diverse and inclusive, and are just a ton of fun.  Here are a few of my favorites that are out, or on their way.

Blue Rose started out in 2005 at the company Green Ronin as a “romantic” fantasy game inspired by the fantasy fiction of authors like Mercedes Lackey and Diane Duane, where relationships are an important part of how the characters interact with the world.  The main country of the setting, Aldis, has a very egalitarian society where there is no “one true way” and all are encouraged to be their authentic selves, and many people work to keep this country and its people safe from those who don’t share those beliefs.  It was groundbreaking at the time as being one of the first games to actively put LGBTQ+ and genderfluid right in the game.  On the 10th anniversary of the original game, a new edition was Kickstarted, and its popularity boomed again.  Now, to make the setting more accessible to more people, they have recently Kickstarted a D&D 5e setting book.  I LOVE how it is structured.  “Ancestry” is used instead of “race”, and all the LGBTQ+ friendly is still in there.  Right now, the PDF is available on the website, and the print book is in the process of delivery to the company.

Okay, I know it sounds weird, but bear with me.  Imagine a world where food is magic.  Food puns are everywhere, like “saucery” instead of “sorcery” or subclasses like the Pact of the Celebrity Chef Warlock.  Go to the tiered city of Caketown, or cross the red dunes of Sopressata in search of new recipes.  Your adventures will be no picnic.  Food brings you together, helps you solve your problems, and have some laughs.  A fantastic diverse indie TTRPG group has worked on this amazing concept.  The Kickstarter has funded, a free Quickstart adventure is available on their Kickstarter page, and more info can be found on the Fat Magic website.

Realms of Pugmire/Monarchies of Mau

The Realms of Pugmire is actually a stand-alone game that uses the 5e rules as its backbone.  You are heroic dogs or cats working together to solve problems.  It emphasizes cooperation and action over competition and violence.  It is a great game to use with kids, or people who just want to do something different.  There are no bad dogs, just dogs who need to learn how to be a good dog.  Realms of Pugmire is available on their website or on DriveThruRPG.com.  There is even a free Phone PDF available, if you want to check it out before committing to purchasing a copy.

Are you a fan of Greek mythology?  Want to travel around the Hellenistic world, from Alexandria to Babylon and further?  This is the fantasy take on the Hellenistic era that will satisfy your needs.  It is a full campaign setting with adventures, new subclasses, and more.  All you need for Hellenistika is right out on their website, available for purchase now.  Live fast, love well, leave a good-looking mosaic.

These are just a few of the fantastic fantasy settings out there that can add spice to your D&D 5e programs.  Why use the same old worlds, when new ones are ready for you to explore!

Christine Martin-Resotko is a Library Assistant with the Mason branch of the Capital Area District Libraries in Michigan.  She is a lifelong nerd starting with Star Wars, and has continued that with a multitude of nerdy interests.  She has been playing RPGs since 1990, and has a collection of 40+ RPGs at her own home.  Christine created the CADL Adventurers Club for her library system, which now has events for every age group at many of the system’s branches.  In 2020, she was presented with the McConnell Award for Innovation, one of the top awards that CADL gives out to its staff, for her use of her abundant nerdy knowledge for the library system.  She has a B.S. in Anthropology from Michigan State University.  She lives with her husband, son, and crazy cat, all of which still admit to knowing her.

Want to write something for GameRT’s Blog? Please do! Please contact us at gamert@ala.org