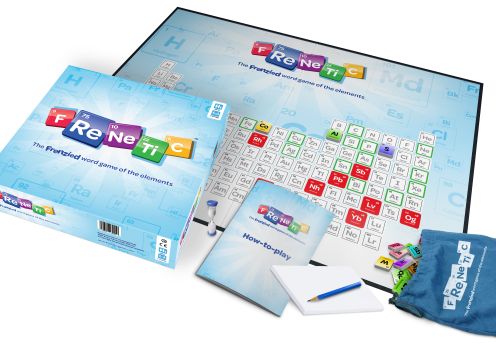 Here at Accentuate Games, we are thrilled to be part of International Games Week and are showing our support by donating copies of our newly launched game FReNeTiC to libraries across the UK!

FReNeTiC is the frenzied word game of the elements and the game board is a customised version of the Periodic Table of the Elements. A challenging and addictive word search game, all players are engaged all the time and must write down as many words as possible within 45 seconds, from Element symbol tiles placed on the board. The novel scoring system uses the Atomic Numbers of the Element symbols used to score the word, eg. Ba Na Na = Banana = 56 + 11 + 11 = 78 points.

10 of the Element symbol spaces on the board are coloured red and were chosen through statistical frequency analysis which showed they could only be used to create < 30 words. Words formed from these symbol tiles allow double word scores

13 of the Element symbol spaces have bold Green borders and are actually elements that can be created from the symbol tiles eg Si Lv Er. Players creating one of these words can win FReNeTiC blank tiles for use as ‘Joker’ tiles.

The game combines, skill, luck and strategy at a frenzied pace and challenges players from 8+ to form words from letters scattered around a board with Capital letters that may appear in the middle of a word. The winner is the first to score 1,000 points.

The game came about during a holiday in October 2017. Myself, Sister Fiona and Wife Daphne had been developing and screening a bunch of ideas for our much needed second game, following the success of Accentuate®. During the holiday, I was reading about Alfred Mosher Butts, the creator of Scrabble. In his research he identified three generic forms of games – number games, move games and word games.

From Butts experiences, I became determined to create a novel word game but couldn’t envisage the theme, it then struck me, I always say to people, ‘Everyone has a game in them’ and those games are usually based on personal experiences in life. I remembered also the mantra ‘you take your school life with you all your life’. But how did that help, I failed my 11+, wasn’t smart or good at any particular subject at School and only later developed a passion for Chemistry and managed to get a Bachelors and a Doctorate in Chemistry from Oxford, that was it! The Periodic Table, what if the 118 Element Symbols could form the basis for a word search board game.

Unlike Butts, who used statistical frequency analysis by reading the front page of the New York Times every day and recording the frequency each letter appeared, to create the scoring system for Scrabble, I leveraged the work of Dimitri Mendeleev who created the Periodic Table in 1869 with the British Chemist Henry Moseley who created the concept of Atomic Numbers and chose that as the scoring metric within FReNeTiC.

The next day, from my sun lounger, I had drafted out a preliminary game-play, a selection of names and instructed our IP partners to draft out copyright, trademark and design protection for the EU28, USA & Canada. 6 months later and it’s on the shelves at all 51 John Lewis stores.

UK Libraries wishing to request a copy of FreNeTiC should fill out the form at http://bit.ly/UK_IGW_2018