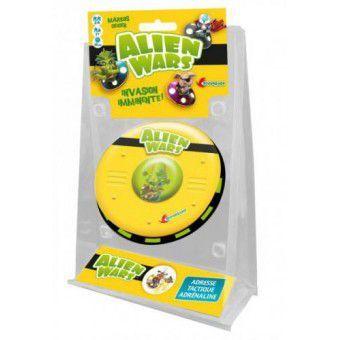 “Alien Wars is a fast, card-tossing game in which your goal is to become Master of the Galaxy, and to do this you need to eliminate everyone else from the galaxy. Then you can do whatever you want with the place.”

Alien Wars is a compact game for a quick play. Well, I suppose quick depends on how well everyone can toss a card. The gameplay mechanics revolve around memory and flinging cards. The game starts with three Nano Minefield cards evenly spaced from each other (the instructions say about 10 inches) flipped over on the field so that the backs of the cards are displayed. Nine cards are then passed out to each player and are simultaneously placed back-side up by the players in the play area without touching but still really close together, like a game of memory.

After all of the cards are placed out, then the first player chooses a card and flips it over. Depending on the card, you will take a respective action. The one that is the most involved is “shooting”. This comes from a Blaster-type card, and to “shoot”, you place your little finger on the card that was activated and place your shooting disc in between your thumb and forefinger (as seen in the image on the right). Proceeding to toss it from that position, you are able to remove any card that it touches from play. Once a player’s cards are all gone, they are eliminated from the game, and the last player remaining wins!

A big thank you again to IELLO for donating this game to International Games Week 2019!