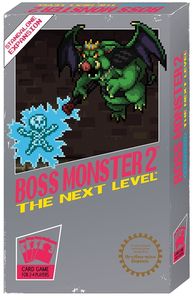 Boss Monster 2: The Next Level

From the website: “The original Boss Monster challenged players to become the ultimate villains: video game-style Bosses. Now Boss Monster 2 builds on the original in every way! An all-new set of 160 cards, Boss Monster 2 is playable as a standalone game or as an expansion to the core set.

Dark Heroes and Hybrid Heroes raise the stakes, while Epic Spells and “cycling” rooms give players more options and flexibility. Boss Monster 2 features everything that made the best-selling original a hit with players of all skill levels, with fresh new mechanisms and exciting new options.

With more Bosses, more unique cards, and more ways to slay hapless adventurers, Boss Monster 2 will take your dungeon to The Next Level!

It’s time for an International Game Week (IGW) Sponsor Spotlight! This time, it’s Brotherwise Games with their Kickstarter goal-smashing sequel/expansion, Boss Monster 2: The Next Level! If you haven’t played the original Boss Monster – YOU SHOULD – then the basic premise is that you’re a Boss at the end of a dungeon (think classic games like Dungeons & Dragons or Castlevania – heck, even Bowser at the end of the Super Mario Bros. World 8-4) and you’re trying to lure heroes into your dungeon where they can perish and you can collect their souls for points. But you aren’t the only Boss around – there are others who have their own dungeons and want the heroes to come to theirs instead of yours. You build your dungeon one room at a time, balancing the kinds of treasures in each room meant to lure heroes with the dangers to damage the heroes lured in, all the while trying to disrupt the other Bosses and their dungeons. And that’s a simplified summary of the game.

Boss Monster 2: The Next Level takes the original game and builds on it. This is technically an expansion of the first game, so it can be mixed in with the original if you already have it and give it even more variety, but it is so full of material that you can play it just by itself (hence the stand-alone descriptor). The gameplay is the same as the original, with the addition of Dark and Hybrid Heroes. Dark Heroes are heroes that have an ability that coincides with their preferred treasure – any player can discard a room card that has the same treasure type as the Dark Hero’s ability states and give them an extra three health points, which can cause a major disruption in an opponent’s plan. Hybrid heroes are Epic heroes that look for two types of treasure and go after dungeons that have the highest amount of those two treasures combined. They also have an ability that are unique to those heroes, making them particularly challenging to eliminate or especially punishing if they make it through your dungeon. Boss Monster 2: The Next Level also provides with it various game modes in the back to change up the gameplay even more if you feel like trying something new. That, combined with the random nature of card decks and shuffling, make for a game with great variety in replays.

The game’s aesthetic is heavy on retro video games, such as the 16-bit art used on the cards and the box itself looking like a Nintendo Entertainment System game box, and other “nerd” culture references, ie. spell cards named Meddling Kids (Scooby Doo) or Wild Monster (Pokémon with card art matching a wild Pokémon encounter from the Gameboy games). It definitely connects well and makes the overall feel of the game very, well, game-y. It helps keep you in the mindset of being a Boss Monster in an older video game, which even if you haven’t played any of, is still fun. Even my friend who has only played one video game in her life (RollerCoaster Tycoon, for those curious) recognized some of the references for games she never played.

A great big thank you to Brotherwise Games for being a sponsor for International Game Week 2019 and pledging to donate this game!