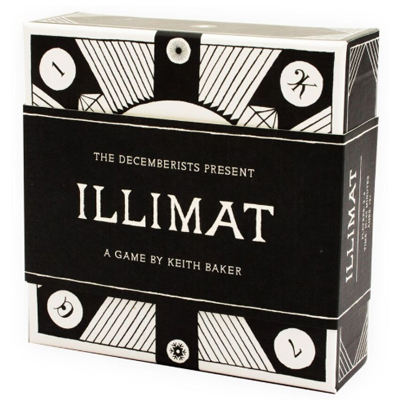 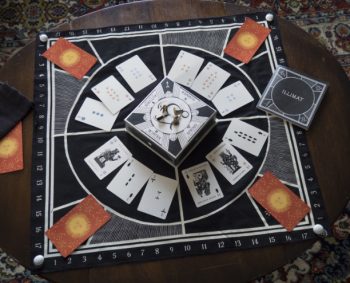 Illimat is a game with an unusual genesis. Rather than starting with an interesting mechanic, a cool theme, or a dynamic strategy as a design impetus (though it did ultimately end up with all of those), it all started as a prop to use in some photos. Portland-based band The Decemberists were planning promotion of their album The Hazards of Love and came up with an idea where the band would act as a secret society playing an esoteric game in a variety of environments for their photos in the run-up to the album’s release in 2009. Flash forward years later, and the band decided to team up with Keith Baker and TwoGether Studios to develop it into a playable game, launched a Kickstarter in 2016, and sent the game into the world in 2017.

Although it started as just a fun lark, Baker was able to design an interesting game that is approachable for a wide range of ages and interest in gaming. With games only lasting fifteen to thirty minutes, it is easy for 2-4 people to approach the game without being overwhelmed. Borrowing from many card games, Illimat uses minor arithmetic and set collection as the driving force of the game, similar to classic games like gin or bridge. However, in quite a unique way the game actually incorporates the box featured in those long ago promotional images as a driving force of the game play. Sides of the box represent seasons and turn along the playing mat changing actions that can be done in that area of the playmat. By combining this with fairly standard card management Illimat is able to add another layer of strategy to the game which can be exciting to both novice and long-term game players. Add to the gameplay the beautiful, esoteric illustrations by Carson Ellis and a small package offers an engrossing experience for all.

To learn more about the gameplay of Illimat, check out this video tutorial of Illimat gameplay.

You can enter to win a copy of Illimat for your library here! This form will close on September 21st.

Thanks to TwoGether Studios for sponsoring International Games Week 2018!