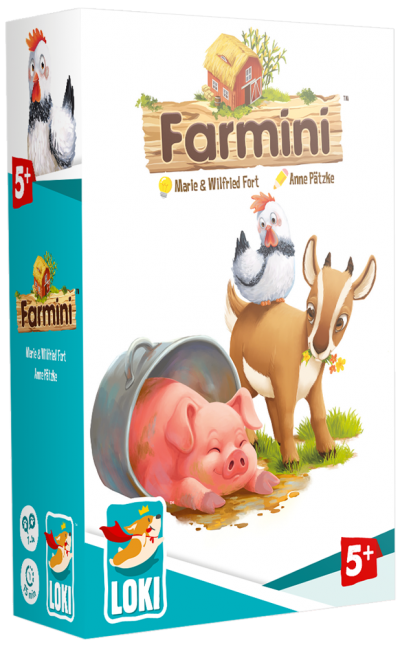 International Games Week thanks Iello for the donation of Farmini, a fun farm game full of cute animals by Loki! This game is for 1-4 players ages 5 plus and takes about 15 minutes to play. There are 54 cards, 15 animal tokens, and a rule book in several languages.

In this game the player’s goal is to create a farm while also collecting the most animals and corn. It seems easy until the wolf appears!

To start the game each player builds a farm by picking one of four cards placed in the center of the table. Cards include farm cards, animal cards, and the wolf. Observation and card placement are key as players choose the best of these four cards to add to their farm, joining fences together, and adding animals to increase their score. But beware, if the wolf appears he will scare off any animals not in a fenced field.

Keep playing until the deck runs out and then count your animals and corn. The player with the highest points wins!

Thanks Iello for donating Farmini to International Games Week 2019!