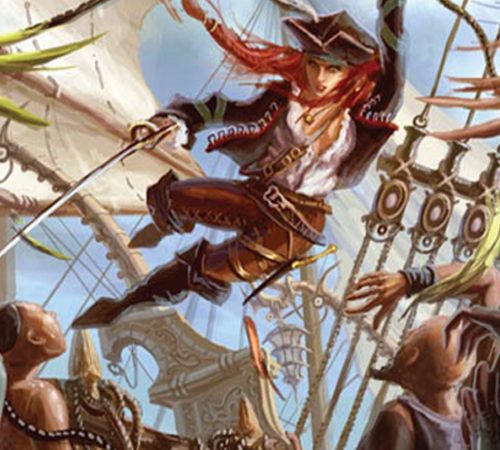 Each year publishers donate games for participants in International Games Week. Today we’ll look at the donation from our wonderful sponsor, Paizo. Paizo was kind enough to donate the Skull and Shackles Base Set of the Pathfinder Adventure Card Game. 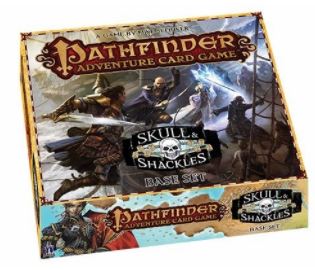 The Pathfinder Adventure Card Game series is a cooperative strategy game where 1-4 players work together to defeat monsters, locate villains, and navigate the treacherous terrain of the Pathfinder Roleplaying Game‘s popular Skull & Shackles Adventure Path. In this iteration of their popular adventure card game series, players are a group of press-ganged travelers who seizes a ship and becomes tangled in a net of intrigue and trouble in a notorious chain of islands called “The Shackles.” You will be facing off against pirate warlords, enemy navies, sea monsters, scurvy dogs, and whatever else the islands can toss at you.

If you’ve played any of the Pathfinder Adventure Card Games (Rise of the Runelords, Wrath of the Righteous, or Mummy’s Mask) you’ll be able to jump right into this one, cutlass swinging! There is not much new for you although the addition of being able to captain a ship is pretty epic. If it is your first time, the rules are easy enough to learn. Players get to choose a character and build a deck of cards representing their gear, magical items, and allies. They then utilize that deck to explore through several locations over multiple perilous scenarios (or just one if you are not playing a campaign). When a character moves to a new location, they draw the top card from the location deck. This is an encounter and it can reveal something helpful (“boons” like equipment, spells, or weapons) or they can reveal challenges (“banes” that present an obstacle to the adventurer’s’ path). Cards are then played from the player’s hand to modify the dice roll required to resolve the revealed card. Boons are added to your deck and banes are defeated and discarded. Henchmen are eventually revealed and locations are closed as characters move closer to the main villain. Once all the locations are closed and the villain is defeated, you win! Characters grow more powerful after each game, adding equipment, gaining magic and learning new skills to their decks as scenarios become more difficult. 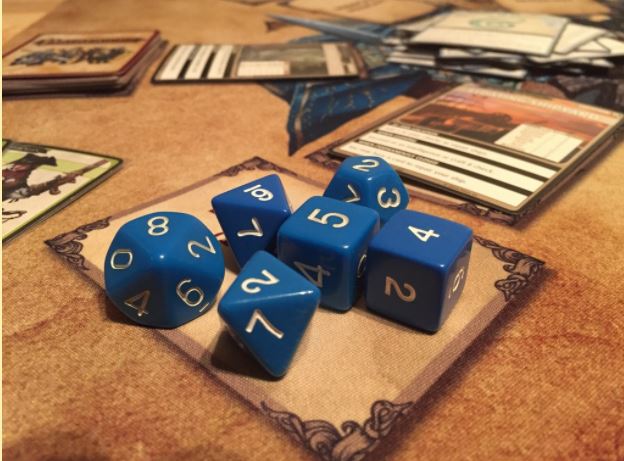 The Pathfinder Adventure Card Game is one of my favorite cooperatives games. It provides the feel of a dungeon crawl board game with some added deck-building strategic elements. You can role-play if you want to add some flavor or just roll along with the experience of exploring locations, fighting monsters, and evading pirates.

You can read more about this game here and see an explanation of play here.

Thank you Paizo for helping make International Games Week a success each year!