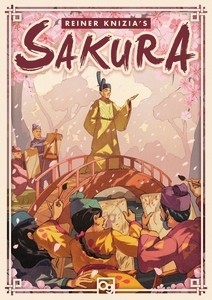 “Every year the Emperor walks through the Imperial Gardens to greet the spring, every year he stops beneath the sakura trees, and every year you try to paint his picture. This will be your year. Artists from near and far will step over their rivals to be closest to the Emperor as he reaches the cherry blossoms, hoping to paint a portrait that will please him. However, should one of them accidentally bump into the Emperor, they would be sure to earn his ire!”

It’s time for another Sponsor Spotlight, this time with Osprey Games’ Sakura! This is a game that uses a risk-reward system coupled with the ability to influence the game board itself. It’s an interesting game to play, as the mental stretches to figure out the best move to play become a lot more complex as more players are added.

As the description says, you play as an artist trying to paint a pleasing portrait of the Emperor, but are contending with the other artists (read: players) to get the best view when he reaches the cherry blossom spaces on the board. How you are lined up is influenced by the cards each player plays each round – the “garden action” moves the emperor or the player furthest away by the number designated, and the “player action” moves the player piece either by spaces or how the board is currently set up (ie. a jump over another player). These movements can be either forward or backward, and each of these cards are played in order of smallest initiative order on the card to the largest. This continues until the emperor reaches a cherry blossoms space, where the game pauses and each player gets points depending on their current distance from the emperor. Afterwards, everyone lines up behind the emperor and the game begins again. There are two more stops along the board’s path, after which the game concludes.

So the mechanics are simple – everyone plays a card simultaneously, pieces are moved , repeat until scoring. The trick lies in other people’s placement on the board. Because everyone plays the cards at the same time and do not necessarily know what order they will be put into action, plans can be easily thwarted by the simple rearranging of player pieces, especially if a player is near the emperor. If a player runs into the emperor, they lose one point and have to move back three spaces. This is what I meant by the best move to play becoming a lot more complex with more players – the more players, the greater the opportunity for your plans to go awry. Consequently, that also can make it more fun, depending on who all is playing. Ultimately, though, it’s a straightforward (in concept, not necessarily movement) game that doesn’t drag out the fun into frustrating madness.

So that’s Sakura! A big thank you again to Osprey Games for donating this game to International Games Week 2019!