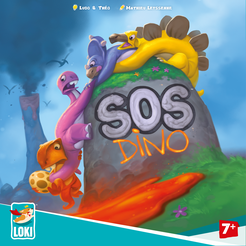 Welcome to another Donor Spotlight! This time, it’s SOS Dino from LOKI!

From their website: “Demonstrate your anticipation and teamwork to save the 4 Dinos! Pick a tile, put it on the board and then move one of the Dinos to secure it safely on the mountains. Beware the lava and the meteorites falling!”

If you haven’t heard about LOKI, they are game developers that focus on creating games for players between four- and eight-year-olds and older. SOS Dino, specifically, is recommended for ages seven and up, and it has the always great choice (to me, anyway) of dinosaurs as the characters.

But let’s get down to obsidian tacks, shall we? The goal of the game is to get as high a score as possible before what is left of possible points is lost. You get points for getting the four dinosaur characters to the safety of the mountains and more points for saving eggs along the way. The trick is that each turn, a tile is drawn from the bag that can be either a lava flow or a meteor. Each of these will impede your path to safety or an egg, but in the case of the lava, you typically get to decide what direction it flows. But be careful! If the flow of lava becomes blocked, the volcano bursts and lava begins to flow from each side.

Generally, you would want to score the most points, but with younger players, they may focus on simply getting the figures to the mountains safely – and that’s okay! One of the nice things about this game is that you can set different objectives if you want, depending on what your players needs and desires are. A simpler game is needed for an audience who wants a simpler challenge? Make it so! Want to crank up the challenge? Make saving all of the eggs mandatory! And the nice thing about drawing tiles randomly out of the bag is that you will have a good amount of replayability from the game.

A great big thank you to LOKI for donating this game to International Games Week 2019!