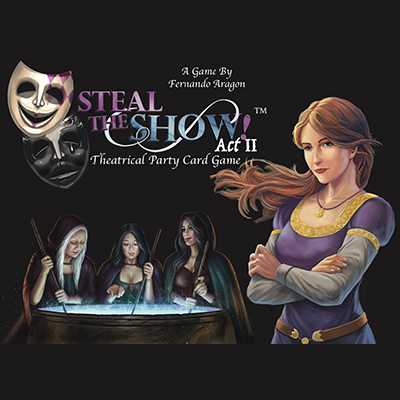 The scene opens on a beach.

Hamlet – I am sick when I do look on thee!

Juliet – You speak an infinite deal of nothing… 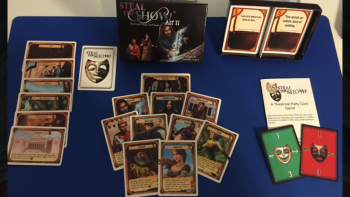 …Wait a second… I think someone mixed up the pages from the Complete Works of Shakespeare. Or maybe we are playing Steal the Show Act II, the theatrical party game by Hungry for More Games!

Have you ever wanted to insult someone as well as Shakespeare did? Maybe get away with it in polite company? Check out this game of competing insults.

In Steal the Show, each player takes on the role of one of Shakespeare’s most well-known characters, and then compete in a war of words amidst some of the greatest sets of all time. Each turn all players draw up to a full hand. Then, the active player selects an opponent and challenges them to a war of Wits or Strength or Wits. From there the hilarity begins. Each player takes a turn playing insults, either using their value to boost their strength or wit, or to use the power of the card, changing the battle in some way. Don’t think you can win? Think that you can outplay your opponent? Play a card face down and call out a number. If they don’t challenge you, the card will be worth your claim. If they do, flip it over. If they catch you in a lie, you gain a tragedy mask. If you are telling the truth, they gain a tragedy mask! Watch out though. Gain too many tragedy masks and you are out of the game. Be the first player to gain 5 comedy masks and you win! 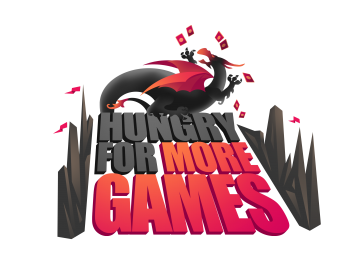 In our playthrough of the game, Falstaff opened up the show in the tavern by challenging Macbeth to a battle of wits! Macbeth was equipped with some great insults, racking up quite a few points. Falstaff fought him off, but his action cards get a minus when played. Falstaff is quite skilled in wit, while Macbeth is not. In the end, Macbeth was able to overcome his deficit and win the battle, earning him a comedy mask. Through the game, Juliet, Romeo, Macbeth, and Puck all fell in time to their own challenges. We traveled from the tavern to the rainforest to the Senate. In the end, Lady Macbeth won the game, snatching the final comedy mask from Brutus on the steps of his own Senate.

Overall, we enjoyed this game of “take that” action and laughed regularly at the vivid insults flung in each battle.

Grab a copy of this great game for your event here. This giveaway ends on September 14th.

Request a copy of Steal the Show Act II

Thanks, Hungry for More Games for sponsoring International Games Week 2018!