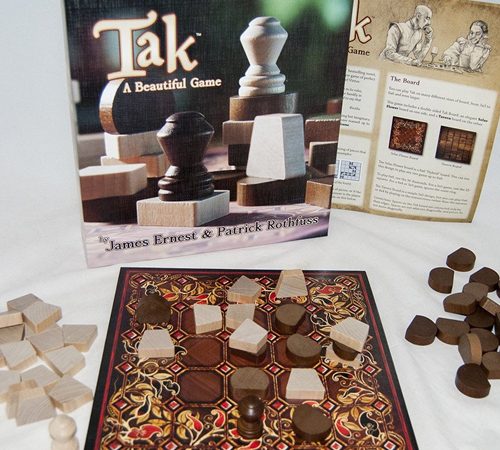 International Games Week would like to thank Cheapass Games for their donation of Tak: a beautiful game. Tak is a two-player abstract strategy game for ages twelve plus and takes about 20-40 minutes to play. 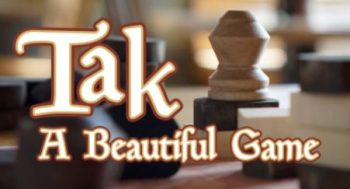 Tak had an interesting journey to publication, which is fitting for a game that intends to compete in a game genre long dominated by Chess and Go. First introduced in The Wise Man’s Fear, Rothfuss’s early attempts to fully flesh out the rules for this game ended with the development of a game that always ended in a tie. Rothfuss was convinced that the game could not be designed as it was intended. Years later, James Earnest of Cheapass Games asked permission to attempt to create the game. Rothfuss refused time and again. After a year of conversations between the two, finally, Rothfuss relented and allowed Earnest to give a run at developing this game, both simple and deep. Something elegant, that can stand the test of time. The result of those efforts is Tak: a beautiful game, and the title is an accurate one.

Tak takes a different look at the idea of an abstract strategy game. Still played on a grid and with the overarching mechanic of area control, Tak is instead about creating paths and doing so by playing as tight of a game as possible.

In Tak, a player has a set number of pieces depending on the grid size played on (4×4 to 8×8). The game begins with each player placing a piece for the other player. From that point forward, the two players take turns either placing a new piece flat on an empty square as a road or moving a piece or stack of pieces outwards in a straight line.

Pieces can also be played standing up on their side. This placement serves as a wall, and cannot be played on top of, but can still be moved by its owner. Larger games also include special “capstones” that function as both a road and a wall but can also flatten other walls.

The game ends when a player connects one side of the board to the opposite side with his pieces, when all squares are covered, or when a player has placed his last piece. Whichever player has connected one side of the board to the other with a path of flat pieces achieves a “road win.” If neither player accomplishes this, then the player who is in control of the most number of squares with flat pieces achieves a “flat win.”

For tournaments, series, or gambling games of Tak, the number of pieces left unplayed can be used as a point system, highlighting the focus of playing the game boldly, or as the character Bredon puts it, “The point is not to play as tight as you can. The point is to be bold. To be dangerous. Be elegant.”

The classic set of Tak includes 62 wooden pieces and a double-sided game board.  i

We want to thank Cheapass games for being a sponsor of International Games Week 2017.