A big thank you to all of the libraries that responded to our feedback survey about your National Gaming Day activities for 2009. The big news is that we more than doubled participation all the way around! 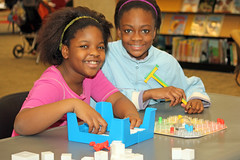 For comparison, here’s how these numbers stack up against last year’s totals.

We were again impressed with the anecdotes librarians gave us in the feedback survey, too. Here’s just a small sampling of the impact National Gaming Day had in communities across the country.