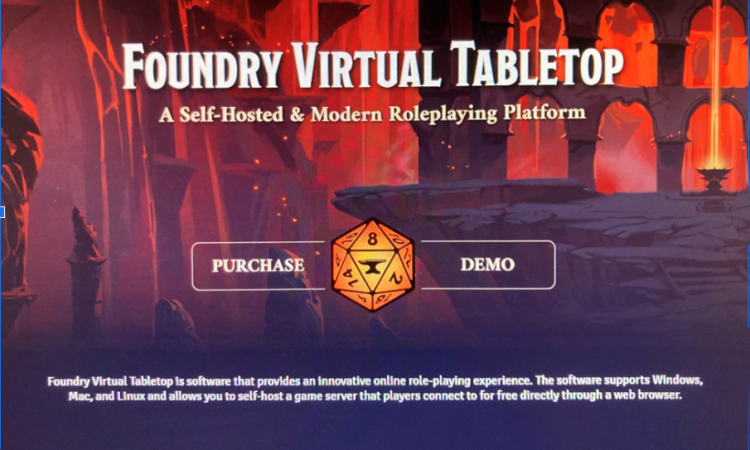 Review of Foundry compared to other of Virtual Tabletop Platforms by Jenn Taylor.

Virtual Tabletops, also called tabletop simulators, are computer programs that allow users to create a digital tabletop environment for role-playing games that can be shared with other players. While the first virtual tabletops were created almost twenty years ago, their popularity dramatically increased over the last three years, particularly through the Covid Pandemic.

Foundry Virtual Tabletop (Foundry VTT) is one such platform. It was first released publicly in May 2020 and has become one of the most popular virtual tabletops, having a reputation for being modern and developer friendly.

To use, the intended game master has a one-time fee of $50 for a license to download the software. This fee covers all of the features, and no “tiers” or subscriptions are required. This license allows the game runner to set up their own Foundry server and customize the user interface to fit the game that will be run. After the initial download and setup, the server is web-based, and all players and the game master can access the set-up server without cost over a web browser.

The platform currently supports 224 game systems, including D&D, Savage Worlds, Pathfinder, GURPS, World of Darkness, and many others. It is customizable enough to allow you to create entirely unique game elements and features, such as dynamic lighting and sound board customization that supports both environmental sound effects and ambient music. It has drawing functions and drag-and-drop from rulesets to character sheets capabilities. It does this through the use of add-in modules.

Modules are best thought of as “plug-ins” or “add-ons” to the Foundry VTT experience, and they can change the behavior of Foundry in many ways, such as adding additional automation to the virtual tabletop, changing the appearance of the tabletop, or adding additional game elements to the tabletop such as NPCs, battle maps, music, items, etc.  There are also “Premium” modules that are put out by game publishing companies that usually contain published sourcebooks, adventures, or other game settings.  These Premium modules have a cost and are usually purchased through the game publisher’s online web store.  There are many modules, with more being added daily, and most are designed and coded by other Foundry VTT community members and released for free.  For example, at the time of writing, there were 1,677 modules available for Foundry, with 306 being Premium content modules.

Foundry VTT, being web-based, is also very stream-friendly, and many pre-recorded and live-stream games can be found on YouTube or Twitch.

Over the last few years, I can say that my experience with different online tabletop platforms has grown out of necessity more than anything. Tabletop RPGs have been a significant part of my life for most of my life, and when COVID-19  made it impossible to hold face-2-face game sessions at work and home, alternate means of doing that had to be found, and tabletop platforms fit my needs. I’ve played and helped run games that have been played on Roll20 and from Fantasy Grounds as well as  Foundry.

Roll20 is a relatively simple and easy web-based virtual tabletop platform released in 2012 by a trio of D&D players who wanted to be able to continue playing together after college. It is free in its most basic form for all players and the GM – but there is a subscription cost associated with adding features, including the community-created content, with 2 tiers of subscription getting different perks. There are many game systems available on Roll 20, and it features “macros” that need to be programmed by the GM or player to function.  Such functions allow for the automation of some aspects of gameplay.

• Website: https://www.fantasygrounds.com/home/home.php
• Players: As many as you wish, depending on the type of license
• 13+

Fantasy Grounds VTT is one of the oldest existing virtual tabletop platforms, having come out in 2004 and then received a bit of a reworking in 2020 with Unity code. It is app-based, not web-based and players can access hosted games for free, but the GM must purchase the “Ultimate” license. This is a one-time fee of $149 or a monthly subscription rate to use the platform. Should the GM not wish to purchase the “Ultimate” license, they can purchase the “Standard” license for $30, but their players will also have to have a “Standard” license to play.  Some of the advantages of Fantasy Ground are that It’s known for having great automation and tremendous support for D&D 5e.  Premium content such as game settings, sourcebooks, and adventures are available for purchase in Fantasy Grounds and are an additional cost. Community add-ons are also present that change the behavior of Fantasy Grounds, much like Foundry.  Fantasy Grounds was a tabletop platform utilized even before the necessity to go to virtual tabletops in our library (pre-COVID). It was used by the GM to project battle maps onto a TV Screen that could be seen by all the players and to track initiative in the Dungeon & Dragons 5th edition game being run.

When we began using Foundry as our tabletop platform, many significant perks made it stand out over the other platforms. The one-time cost is much more manageable and gives you more for your money. And having the platform be web-based made it much more convenient for individual players and the devices they had to play through. The customization options, the community of users, and the growing number of game systems supported added to the appeal of this platform. Most recently, we used the virtual platform for our Star Wars: Edge of the Empire game, and the customization abilities have been perfect for that, allowing great visual aids, automated maps, and customized tokens for play.

The Galaxy Map used in our Star Wars: Edge of the Empire game.

A “zoomed in” section of the map used in the Star Wars: Edge of the Empire game.

A combat scene on the map used for the Star Wars: Edge of the Empire game.

Even in games that are not virtual, the Foundry tabletop platform has multiple features that make it a convenient tool to use in a face-to-face game, just as Fantasy Grounds was previously, with the benefit of the lower cost and web-based accessibility to players who could even access the game from a smartphone.

Jennifer Taylor is the Teen & Adult Services librarian for the Hagerstown Public Library in the scenic small town of Hagerstown, Indiana where she has worked for almost 10 years, developing a circulating board game collection and multiple successful tabletop gaming programs. She is a “2nd Generation Gamer” determined to teach as many others as she can – be they family, friends or complete strangers – the joys and benefits of gaming, particularly RPGs.