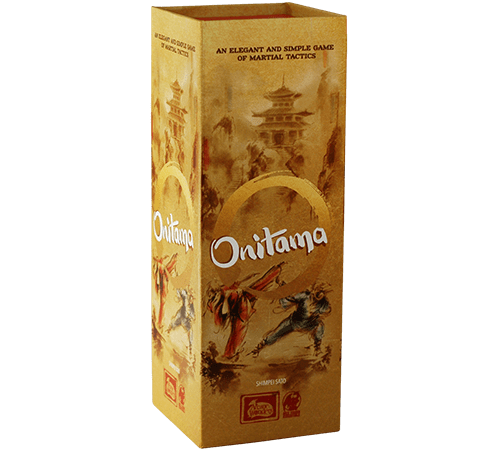 A series of Games from the Wardrobe reviews by Alec Gramm

I come before you today with the first in an irregular series of articles I have collectively called “Games from the Wardrobe.” In essence, I will be writing about games that I have at home that I think will be of personal interest to you or for your library’s collection. The “Wardrobe” part comes from the fact that I store all of my board and card games in a wardrobe. That’s it. That’s my schtick. Anyway – on to the write-up!

From the website: Carved into the crags of the mist-shrouded mountains of ancient Japan lies the Shrine of Onitama. It is a place of enlightenment and skill, a site dedicated to the spirits that guide the Schools of Martial Arts across the land. Masters of these schools hazard the journey to Onitama with their most promising disciples to meet within its hallowed walls and to prove their superiority in battle against the others.

It plays a lot like chess, but I’ll explain further. It has a mat with the play field where your five pieces–four Students or ”pawns” and one Sensei or ”king”–face off against your opponents’ five pieces. To win, you need to either capture your opponent’s Sensei piece in the same way you capture the king piece in chess, or get your Sensei piece to the opponent’s gate located on the direct opposite side of the play field.

How you move these pieces, though, is where it really gets interesting. See, unlike chess, you only have five different moves that can be done in the entire game, and you can only choose two from those five to use on your turn. How do you know which moves you can use? Why, with the handy little move cards that you deal out at the beginning of the game. You shuffle, then randomly draw five from a deck of 16 cards, placing two in front of you, your opponent, and the fifth one on the side of the mat clockwise to the starting player. Each of these cards shows where one of your pieces can move on the mat.

When it’s your turn, you choose between one of the two moves in front of you, and whichever move you use, you take that card and move it to the side clockwise from your position. Then you take the move card that was counterclockwise from your position and replace the old move card with it. What you end up with is a cycle of moves that get passed between you and your opponent, each trying to outmaneuver the other until victory is secured.

And, may I say, doggone, this game feels good. I think it nails the theme in its concept and the translation to the gameplay mechanics. You each know your opponent’s moves, you know which move you’re getting next, and you know whichever move you use, your opponent will be able to use later. It very much invokes the feeling of martial artists trading blows like you might see in a martial arts film or demonstration – moving in anticipation to block, strike, and position yourself while trying to use your opponents moves against them. Full disclosure, I really enjoy martial arts films, so this theme and how the game plays really connects well with me.

Accessibility: In case you don’t know about them, I frequent Meeple Like Us, and I especially make a visit when I’m looking at purchasing a game for the library I work at. Its core focus is about accessibility of board games, and along with their other work, they do reviews and “teardowns” of board games. A “teardown” is essentially a review of the game’s accessibility in various areas (e.g. color blindness). All that to say, they did a “teardown” of Onitama, so check it out if you want a more thorough analysis. I’ll paraphrase a few components of that review here:

Verdict: To put it simply, I think it is a decent choice to pick for a library’s collection. The simplicity of setup and the mechanics of gameplay make for an easy game to pick up and play. If it’s available for in-library play, the generally short length of play makes it easy to finish in a quick library visit. In fact, since it only takes two to play, there’s less of a player threshold for a game to be played, and one of those could be filled by a library staff if you wanted to do a demonstration play. And as far as accessibility goes, I think it does well enough to accommodate a good number of people, but if your collection could use some games that are accessible to a wide range of audiences or you can only get one game for your library, you’re going to want to pick something else.

The box itself occupies a relatively small amount of space, though it isn’t a “normal” game box shape, so it may lend to rearranging to make it fit depending on your library’s shelving structures. Also, I found out while writing this that there are two expansions to the game. While I haven’t played them myself (though they’re going straight to my wish list), if the game proves popular at your library, there are options to expand the gameplay if library visitors peter out on their desire to play the original. At the time of writing, a new copy is sitting around $30. It’s a bit on the pricey side for the number of components you get, but they feel like they’re made out of sterner stuff, so it kind of seems acceptable. I haven’t dealt with lost piece replacement, but you could easily substitute the pieces for something else if Arcane Wonders doesn’t do replacements for it.

And that’s Onitama! A quick, simple game that has a great amount of “Best 2/3/4/x out of…” potential for players. I hope that helps bring attention to a game I feel deserves the limelight and informs a purchase for your library. Join me next time for a write-up of a party game that I love but all of my truly competitive friends hate.

Alec Gramm is a Youth Librarian at the Tippecanoe County Public Library in Indiana where he runs gaming programs for teens and kids. Alec is a member of the GameRT Membership & Promotion Committee and has been a part of GameRT since becoming a full-time librarian, starting out with (and still part of) the IGW Committee as well.

Alec enjoys all manner of games. His current top five board & card games are Onitama, Splendor, Carcassone, We Didn’t Playtest This At All, and Hanabi. His current top five video games are Pokémon Blue (nostalgia is not something to be trifled with), Ace Combat 5, Mega Man Battle Network 3: Blue, Phoenix Wright: Ace Attorney, and Earth Defense Force 4.1.