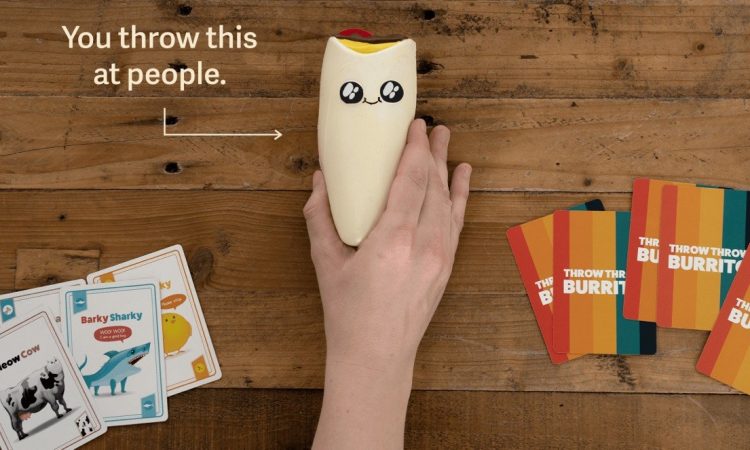 Overview: Throw Throw Burrito is a silly game from your favorite silly game makers. All players sit around a table with cards facedown and burritos in easy reach. Like in the game Spoons, players must make a set. In this case, three of a kind. Unlike Spoons, however, you need not wait for the player to your right to pass you a card. There are community draw piles from which all players can draw and swap out or discard cards. In other words, it is a chaotic free for all.

The game comes with 120 cards, 6 cardboard burrito bruisers, 1 cardboard “Fear Me” badge, and two very cute, very squishy, very throwable burritos. If the name wasn’t indication enough, this cannot be played in small spaces or where there are delicate objects. Because throwing. And while chucking a burrito at your friend is a major part of the game, the overall goal is to get the most points and win. Card sets earn you points while burrito bruisers (earned when you get hit by a burrito) dock you points. The game is played in two rounds (the winner of the first round gets the “Fear Me” badge).

Cards come in two different styles: regular cards and battle cards. The regular cards simply earn points and are set aside with no further action. Brightly colored cards are adorned with goofy illustrations of strange characters like Goth Sloth and Floaty Goaty. But when a set of three battle cards is made, not only does it score points, but it also activates the best part of the game: burrito throwing! There are three kinds of burrito battles (although, for a two player game, every battle card leads to both players battling each other). For 3-6 players, the following happens.

Again, this game needs a lot of space to play. The large space is also essential as this game intrinsically encourages running. It can seem intimidating to learn when reading through all the rules, so this game is best learned by diving right in. Even so, the hands-on nature of the game will surely make this family friendly party game an easy favorite. Players of all ages will really just be waiting to throw the burrito!

Verdict: I wouldn’t recommend this game for in-house programming for obvious reasons. It is a little too chaotic and physical. However, this is a great game to add to a kids or all ages circulating collection. It has a low learning curve so it is great for casual gaming but has enough of an indie game aesthetic that it is sure to please a wide variety of prospective players. It is also an affordable game, and its durability would make it easy to return in book drops. The one downside is, with multiple checkouts, and lots of use, the soft and squishy burritos may need replacing at some point, but it will be well worth it.

Erica Ruscio is the Teen Services & Makerspace Librarian at the Ventress Memorial Library in the lovely coastal community of Marshfield, Massachusetts. She is proud to have developed a circulating board and video game collection and runs a wildly popular D&D program for teens. Erica is a member of GameRT, YALSA, and (newly) GNCRT. When not librarianing or planning D&D campaigns, you can find her at the beach, wandering the streets of downtown Boston, or anywhere with her nose in a book.