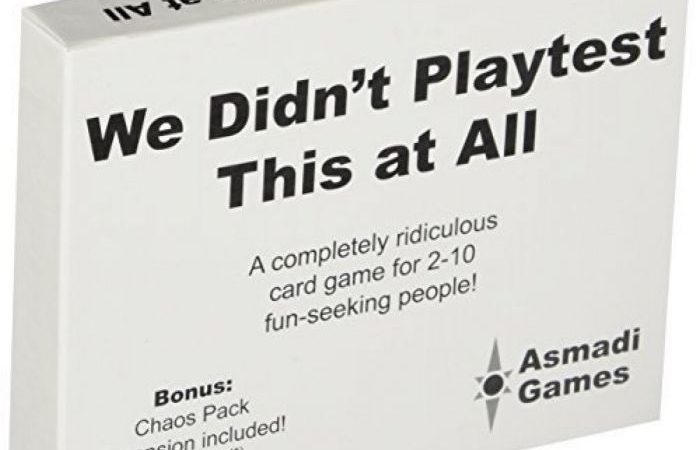 I come before you today with another “Games from the Wardrobe”. For those that missed the first article, in essence, I will be writing about games that I have at home that I think will be of personal interest to you or for your library’s collection. The “Wardrobe” part comes from the fact that I store all of my board/card games in a wardrobe. That’s it. That’s my schtick. Anyway – on to the write-up!

We Didn’t Playtest This at All! by Chris Cieslik

From the Amazon Product Description: The most aptly named game ever. In this exceptionally silly and awesome game, your objective is to win. Simple enough. Sadly, all of your opponents have the same simple goal and they are trying to make you lose. Between rock paper scissors battles, being eaten by a random dragon or saved by a kitten ambush, there are many hazards to avoid. Games last between 30 seconds and 5 minutes (if you play slow) and specifically engineered to fit in maximum fun. Any number can play, though we recommend between 2 and 15. Rumors of 20 person games swirl around the Internet. The chaos pack expansion is included and contains a side deck of 15 new cards you can use alongside your copy of the full game. Every game, you randomly draw one chaos card and it becomes a rule that must be followed for the entire game. The 2 blank chaos pack rule cards are also included.

Really, the product description preceding this section does a fine job of explaining the game. But a better way to describe the objective of playing the game, I feel, is to either win or not lose. The game itself is set up with every player being dealt two cards and the remaining cards set out as a deck. The game begins with a random player going first – how you determine that is your call. I personally delegate a corner of the box lid and spin it a la spin the bottle to determine who goes first, but there are definitely more fair and/or efficient ways to do so. Once a first player is chosen, they draw a card and play a card. Simple as. You do whatever is written on the card, whether it is a rule that changes how the game is played or something more direct like “Cake or Death” where the three outcomes determine who loses or even wins. After their turn ends, play moves to the player on their left. Repeat until someone wins or one person doesn’t lose.

As for how it feels, it’s a party game, plain and simple. And much like party games, how fun it is depends largely on the party. In case it wasn’t apparent in the previous section, the game is pretty wacky by design, so if anyone in your group likes more structure and rules or is extremely competitive (read: doesn’t like to lose), they might struggle a bit with the game. But what about the part that doesn’t depend on the party? The game itself is quite quick, for both reasons of the rules mainly being on the cards and eliminations are fast – sometimes so fast a game is over almost as soon as it begins.

Accessibility: In case you don’t know about them, I frequent Meeple Like Us, and I especially make a visit when I’m looking at purchasing a game for the library I work at. Its core focus is about accessibility of board games, and along with their other work, they do reviews and “teardowns” of board games, with “teardowns” being essentially reviews of the games’ accessibility in various areas such as color blindness. As they don’t have a teardown of We Didn’t Playtest This at All, I will be using their toolkit to analyze this game for some areas of accessibility to consider.

Verdict: It’s a good addition for a collection. Off the top of my head, there aren’t many games that accommodate a large group of players that don’t involve understanding social cues or utilizing logical reasoning, and this would be one of them. It’s simple to play, sets up quickly, and has a short game length, which allows for quick demonstrations or a good way to fill in time if someone is waiting for another game to open, say, during a game program. It’ll probably be better for a teen (probably also tween) or older program, as I’ve heard some of the concepts of the cards may be harder to grasp for younger players. It’s also easy to add people in. It’s not something that anyone would want to play for an hour, as most people have had their fill after a few games. Still, I haven’t gone through a single play session where I didn’t hear laughter, especially from the players who are new to the game as they vocally express “What the world/heck/[noun of choice]?”

The physical box is fairly small and would easily fit on most shelves, and since it has the title on the edge of the lid, it can be stored on its side as well. “Expansions” exist (We Didn’t Playtest This Either & WDPT: Legacies), of which I have only played the “Either” expansion. It’s not a necessary expansion, but it does add more variety to the game. It also can be played as a standalone game, so if the original proves popular at your library, there’s another to add. The legacy version sounds interesting, but the concept of a legacy game to me doesn’t make sense in a library setting, as you physically alter the components in it during play and subsequent plays. Obviously, that does lend to problems for anyone wanting to play after the game would be returned to the library. Lastly, they all currently sit around $15, so it’s a game that is fairly affordable.

And that’s We Didn’t Playtest This at All! A short, fun party game who’s only strategy is crossing your fingers in hopes that you end up winning (or not losing). Join me next time for a game that many call the proper replacement for Monopoly.

Alec Gramm is a Youth Librarian at the Tippecanoe County Public Library in Indiana where he runs gaming programs for teens and kids. Alec is a member of the GameRT Membership & Promotion Committee and has been a part of GameRT since becoming a full-time librarian, starting out with (and still part of) the IGW Committee as well.