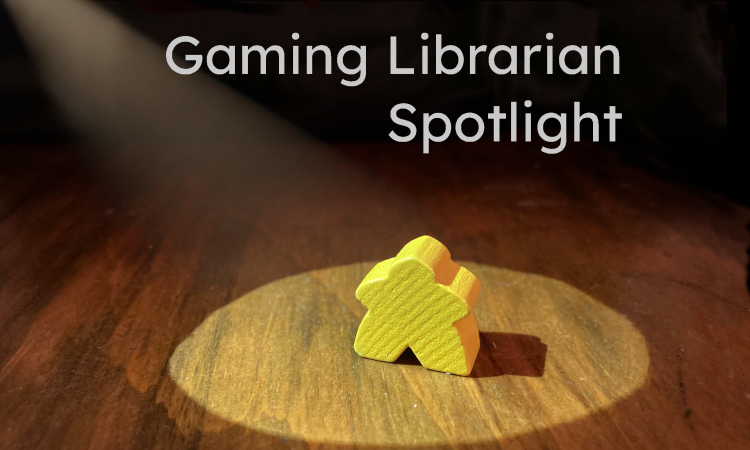 Tell us about yourself. In a nutshell, who are you and what is your role at your library?

I’m an avid gamer, musician, and librarian who works with kids and teens at my library. I love playing video games and Yu-Gi-Oh!, competing at gaming tournaments, repairing game consoles, and arranging video game music for saxophone and other instruments. At my library, I plan and run different programs for both age groups, such as anime clubs, Pokémon clubs, Teen Advisory Board, and a recurring flavor guessing program called the Taste Test Challenge. I love incorporating music and gaming into programs when possible, so I often play guitar for the kids at music time and bring in my Switch and retro consoles for game nights for both kids and teens. I also curate my library’s growing collection of manga and Switch games.

My parents had an NES when I was really little. It was already considered retro at the time, but I thought it was really cool, and they would help me play Super Mario Bros. and Duck Hunt on it. I soon became interested in getting more games for it, so my parents would take me to flea markets and let me buy other retro games and consoles, which ended up turning into a lifelong passion. My parents have always been really supportive of my interest in gaming, which is something I’ve really come to appreciate.

My favorite game of all time is Super Smash Bros. Melee for the GameCube. In my free time, I compete in Melee tournaments as well as run them at my local tournament venue. There’s no other game like Melee–it’s provided me with lifelong friends, a passion for competition, the discipline to keep practicing and learning, and the courage to keep trying even when first place might feel out of reach. I love traveling around New England to enter tournaments and make friends from different states and even different countries through a shared passion for the game. I’ve tried plenty of other fighting games, but Melee is the one that’s clicked with me most and that I have the most fun playing, and I don’t think that’ll ever change!

I’ve run retro gaming history themed programs with friends both at my library and at other libraries, where we set up an array of different retro game consoles like the NES, Nintendo 64, PlayStation 2, and Sega Dreamcast and let attendees try out each different console. We print out history cards with fun facts about each console, let participants ask questions about the consoles as they play, and help them out if they’re struggling with the games. I’ve always been most proud of these programs because participants will talk about how much they loved a certain console growing up or tell me stories about how their favorite games impacted their lives. Some parents will bring their kids just to show them what games were like when they were growing up. Out of all the programs I’ve run, these events have always given me a greater appreciation for video games and the positive effects they can have on us, and I hope to run many more of these programs in the future.

Pokémon has been huge in our community as of late. I’ve been ordering lots of Pokémon books and manga for patrons, and I’ve started up a biweekly Pokémon club for elementary schoolers that’s been super popular. It’s great to see all the different ways the club members enjoy Pokémon, whether it be collecting toys, playing the Pokémon TCG, or playing the video games. I even had a kid bring in his Pokémon LeafGreen file to show me, which is awesome! I’m obsessed with Pokémon, so I love seeing other Pokémon Trainers have a passion for the series. Games like Smash Ultimate and Mario Kart are always a favorite here too, of course, as well as classic series like Sonic the Hedgehog.

What value do games bring to your library community?

Games bring so much to our community, especially to the kids. We have both a Switch game collection and a board game collection with games for people of ages, and the difference has been clear ever since developing those collections. There aren’t really any stores where you can rent games anymore, so that magical experience of getting to try out a different game every few weeks without having to convince your parents to buy it outright has largely been lost on today’s kids. I think libraries taking over that role makes perfect sense–and it’s free for our patrons, too! Kids and adults alike get so excited trying out new Switch games and board games and telling us about them. We have plenty of kids who come to the library just to play board games with their families and friends, and who come to our Switch nights and get really into playing games like Mario Kart. Games really do bring everyone together, and seeing the imagination and excitement of all of it makes me confident that games and libraries are a perfect fit.