This first game was played at the Demos and Developers portion of Trade Day, where we, the participants, traveled to different tables where developers had set up the games they wanted to show off and demonstrate and either played or conversed with the representatives.

Without further words, here is the first game I’ll be writing about. 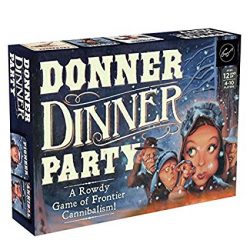 In Donner Dinner Party, you play as the tragically doomed pioneering crew of the same historic fame in their infamous predicament of being trapped in the heavy snowfall during winter on their journey to California. Food supplies have become scarce, and the group must scavenge for food, and if not enough is found, someone must be sacrificed so that the group can eat and survive another day.

Here are the full game instructions, but the gist of it is each party member contributes food to the pile, and if there isn’t enough or someone sabotages the food supply, everyone votes on who to eat to satisfy the need to feed. This continues until either all the cannibals are dead or they outnumber the pioneers.

If this game sounds familiar, it’s because it uses gameplay similar to the Ultimate Werewolf line of games, which were inspired by the social party game Werewolf. (Technically, Mafia came first, but it’s basically the same thing just with a different theme). A few differences make it unique, like the mechanic that there does not have to be a vote to off someone if enough food is supplied in the round. Another component of the game that gives it its own style is the use of supply cards that either can influence the scavenging round or the voting round. They also provide optional rules to give more variety or challenge if you want it.

An example of how each skill is played (ha!) out:

Critical thinking: Deducing who is a cannibal and who is not based upon their actions, demeanor, or other clues.

Persuasion: Convincing the other players to not vote for you or vote for who you think should be eaten.

Simple Math: Adding up the food harvest card to see if there is a sufficient amount to feed everyone or not.

I think it is a good addition to a library’s collection. The gameplay is fun, especially if you like the social party game style, and is easy to play either with friends or play with strangers. The rules aren’t complex, and a simple trial round should be enough for most people to understand how it plays. Having a relatively small box makes it easy to fit into storage space or on a shelf for display. It doesn’t have any key game pieces that, if lost or broken, would make the game unplayable, which is great if you have a circulating game collection and pieces go missing or perish in the play. It’s also based on a historical event, so you could theme around it with social studies or American history if you want more educational value from it.

I’ll try and give a brief accessibility overview in the interest of bringing that perspective to the forefront. I’m no Meeple Like Us, so I can’t say I’ll be nearly as comprehensive or as well-versed on the areas of discussion, but I’ll try to at least give a short mention of a few matters. I don’t foresee any game-breaking issues with the color choices on the cards or few game pieces, though the cards don’t have any physically distinguishing characteristics for players. There isn’t anything that utilizes noise in the gameplay that makes it essential to play, though communication, while also not essential, is an important component of the voting phase. Because of the nature of “majority-rules” in the voting, it is easy for someone to be ganged up on, which while kind of the point, can lead to an emotional response. All of the character pieces in the game are white, which while historically accurate, still isn’t a gold star in inclusivity. From what I remember, there was a good split in female and male pieces. Those don’t affect gameplay mechanics at all, as those pieces are simply physical count trackers. It also goes without saying that this is a game about cannibalism, so if any players have a problem with that, they will want to steer clear of this.

And that’s Donner Dinner Party! Hope this was a sufficient amount of information for you to make some decisions with or at least inform you about the game. If not, feel free to ask any questions in the comment section below, and I’ll do my best to answer them fully!