I previously wrote on Donner Dinner Party, but since this game is from the same area, I’m going to keep the same intro.

So as before, on to the game:

In Pictomania, three cards with several words are set up for all the players to see. Each of these cards are placed in a card holder labeled A, B, or C, with each word on the card also given a number. The players are then randomly and discreetly given a letter and a number card designating what they are to draw on their paper. They are also given five point “chips” (cardboard pieces designating 1, 2, or 3 points) of their player color that is used for their opponents. The last component is a set of cards numbered 1-7 with a single digit on each card used for guessing the opponent’s drawing.

Here’s a picture taken from CZE’s website to help give a visual for what I’m describing: 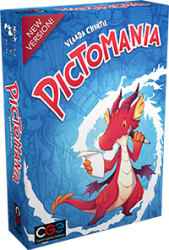 When the signal to begin is given, the players begin to draw what they were designated to draw, but there’s a catch. They also need to simultaneously be aware of what their opponents are drawing as well, because that’s what they need to guess on. If you are the first to guess an opponent’s drawing, done by laying the card number you think they are drawing, you get their three-point chip, and subsequently 2, 1, or none if you aren’t fast enough. You can’t neglect your own drawing while looking at others, though – your earned points will be diminished, if not demolished, by the leftover chips not taken by your opponents if they didn’t feel confident in guessing on your picture. If you are able to hand out all of your guesses, there are a set of bonus chips that you can take (3 to 1 points, depending on order) so there is a race to total completion as well. And did I mention there was a timer on top of all of this? If you don’t finish in time, you miss out on those guesses, and likely, points. Whoever has the most at the end of four rounds wins.

The first thing that struck me as I played this game was how it felt like a Pictionary version of Code Names – the drawing and guessing portion obviously from Pictionary but the guessing from a multitude of choices and thinking like the artist/clue-giver from Code Names. There might be a different game that fits better, but since CZE made both this game and Code Names, it seemed like a logical influence to me.

The game gets pretty hectic during the drawing and guessing phase of the game. It was pretty challenging for me to juggle trying to draw competently, monitor what my opponents were drawing, AND look at what the options were for guessing. There were several rounds where I didn’t get to guess on more than one drawing because I was too focused on trying to discern how to differentiate my drawings from other options, such as the difference between drawing a tavern and a pub. The game doesn’t drag on either because of the rounds being timed to about a minute (I can’t count grains of sand, so it’s a rough guess), so downtime only really happens when you’re totaling points and score.

An example of each in the game:

Abstract Reasoning: Discerning what other players’ drawings are in order to make a guess.

Spatial Intelligence: Taking what is in your mind and drawing it on the paper.

It’s fun. The frantic rush of trying to draw and guess at the same time really helps set the challenge, especially if you’re like me and tend to get fixated on the drawing to make it guessable before looking at everyone else’s. I think it’s a good game to add to a library’s collection, especially this second edition. The second edition doesn’t change in gameplay from the first, but the box size is significantly smaller than the first’s, which is great for shelf space either out on display or in storage. The gameplay is pretty straightforward and simple to understand, though the initial setup and figuring out how it’s structured will take a little reading of the instructions to put together, but even that should be easy enough. There aren’t any pieces that are essential that can’t be replaced by a homemade stand-in, which may be preferable in some cases, which I’ll explain further in the next section. If you wanted, this could be used in an art program, which after you all discuss your drawings and the reasoning behind what you drew and the choices made in deciding what would be the best to draw in order to convey the keyword.

I’m going to again give a brief accessibility overview in the interest of bringing that perspective to the forefront. Shoutout to Meeple Like Us who do great work on this matter, but I’m not as well versed in this matter as they are. I can’t say I’ll be nearly as comprehensive or as well-versed on the areas of discussion, but I’ll try to at least give a short mention of a few matters. Since the game primarily utilizes pencils for drawing, color isn’t going to be an issue for the critical part of gameplay, though the number cards that each player has can be an issue. A remedy to this could be making your own cards with either colors that are more friendly to people who are colorblind or physically manipulating the cards (cut out patterns on the edges). Because the game relies on the player being able to see the opponent’s drawings, vision is essentially a requirement to play. Noise isn’t necessary to play, as the only thing you would need noise for is to signal time is up, though that can be easily replaced by tapping on the table. Depending on who is playing, the drawings could be obscene, but that speaks more to the player’s interpretation than the game itself. If there are words outside of someone’s vocabulary, feel free to take a moment when looking at the fresh set of cards to ask if there are any words that anyone isn’t familiar with (or phrase it in a way that doesn’t make someone stand out if they don’t know) or just go over each word anyway and describe what they are so there aren’t any barriers that way.

And that’s Pictomania! Hope this was enough information for you to make some decisions with or at least inform you about the game. If not, leave a comment below and I’ll do my best to answer them fully.