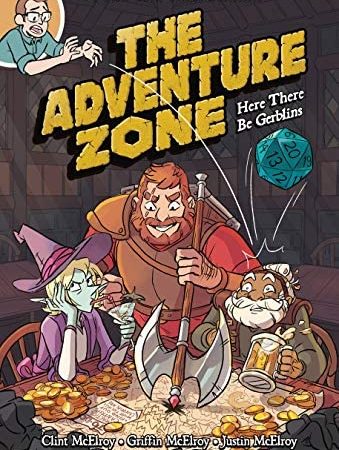 Book Review: The Adventure Zone: Here There Be Gerblins

This series is a collaboration between ALA’s Gaming Round Table and the Graphic Novel and Comics Round Table (GNCRT.) GNCRT members have written comics recommendations for crossover media related to gaming that GameRT members might enjoy and use in their praxis. You can find more information about the GNCRT here.

A graphic novel adaptation of the immensely popular McElroy family actual play D&D podcast, The Adventure Zone: Here There Be Gerblins is a highly accessible gateway into the world of Dungeons & Dragons. The comic is filled with Griffin’s colorful worldbuilding and creative approach to roleplay which beautifully compliments his family’s sharp wit and zany one-liners which bring such joy to the experience. On its own Pietsch’s art makes for a visually compelling comic that is a pleasure to read, but what sets this book apart is the way it uses the comic medium to communicate the unique role the Dungeon Master plays in a D&D scenario. Rather than simply relaying the narrative of the podcast like any high fantasy story, this comic includes DM Griffin as an occasional narrator who both sets the stakes and breaks the fourth wall as he razzes his players. This relaxed meta approach to putting a D&D game on the page captures the fun energy of the show while letting people who may be intimidated by the complexity of D&D know that it’s okay to play around and make it up as they go.

Although the comic is stylistically appropriate for a young adult audience, the built-in fanbase of the podcast ensures that the books will be in high demand with a variety of library users. For those not already familiar with the series, the book (and the podcast, which is available for free on most major podcast streaming platforms) can serve as a low-stakes way for readers to build up the confidence to try TTRPGs. For libraries looking to start gaming tables, The Adventure Zone is a great way to open the conversation with administrations and library users alike.