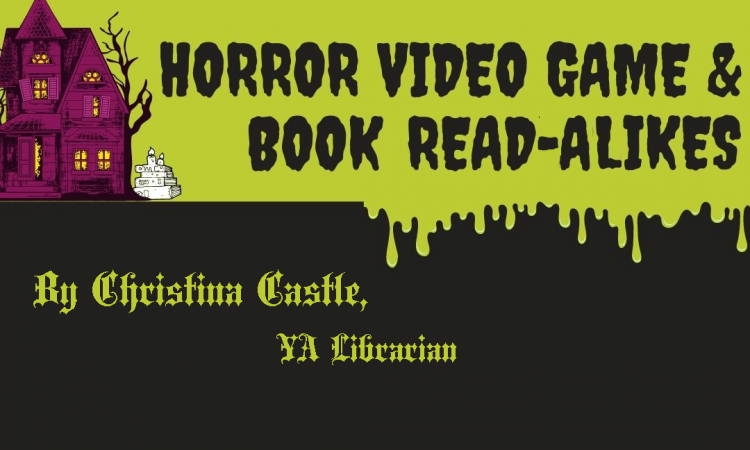 I love scary games. I’ll play any horror game the Bloober team puts out (like Blair Witch), Horror from EpicGames (Alan Wake), or titles from Dontnod (like Vampyr). In addition to the titles above, I also like Soma and Five Night at Freddy’s. I also really enjoy spooky books—supernatural, cryptids, your house is screwed haunted houses, your friend is screwed possessed and bought a hotel—it’s all fun and I love a good twist. I’ll also read anything by Joe Hill, Camilla Sten, or Adam Cesare.

Hopefully this gives you some idea of my tastes before we dig in. And while this librarian believes that horror is fun year round, she also understands that some people can only steel themselves during the spooky season. So, here are 5 horror books to checkout if you liked the horror video game (and vice versa)! I chose to limit myself to 5 games for the sanity of anyone reading this article, as I could have recommended more.

Up first is a true fave, Blair Witch. Our protagonist, Ellis Lynch, has agreed to help on a missing person’s case with his trusty dog companion, Bullet. As one might expect, he starts getting lost in the woods and starts finding all these wooden totems. This game has great atmosphere and it slowly builds as it layers on it’s lore. A great book pairing for fans of this game would be CJ Tudor’s The Burning Girls. This novel is usually shelved as suspense/thriller, but all good horror has layers. We follow Jack, a vicar (aka Pastor) who has been called to oversee a new parish when their old vicar is murdered. In tow with Jack is her Lydia Deetz-like daughter, Flo, who shortly after arriving begins to explore the grounds and finds these little doll effigies. This build of tension & mystery is so similar to Blair Witch and is sure to be a hit for fans.

Until Dawn and The Dark Pictures series is a clever take on horror. You want control of who lives & dies in your horror story on your way to terrifying answers? You better make the right choices then! This game uses the Butterfly Effect, an idea that one choice can have ripple effects and affect many others. In Until Dawn, we play as a group of teenagers who have travelled to (and are now stranded in) a remote mountain cabin. One thing after another goes wrong—as it does—and the characters are forced to survive or die. Oh, and there might be cryptids! This game would pair well with The Mary Shelley Club by Goldy Moldavsky. The Mary Shelley Club is Scream meets One of Us Is Lying. Our protagonist, Rachel Chavez, stumbles on a mysterious group of horror-movie loving students who have a club named after a horror great- Mary Shelley. The catch is that the club members must pull off an epic horror prank in a limited amount of time and they may be asked to help someone else in the club with theirs—no questions asked. While there’s no cryptids, the ending is definitely just as twisty.

The Medium is one of the most interesting horror indies I played last year. Our protagonist, Marianne, is a medium who can exist in two worlds—ours and the spirit realm. Sometimes this is displayed at once on the same screen, meaning your choices affect you and your spirit you at the same time. This dual-reality really elevates the psychological horror aspects of the game and the themes/setting make me think of Mexican Gothic by Silvia Moreno-Garcia for this one. In Mexican Gothic, Noemi has been called out of town for family reasons. The letters from her cousin grow increasingly strange and, much like Marianne’s world(s) there is definitely something in the air with both of these stories. While their stories go in different directions (letters bring Noemi out and letters keep Marianne going) there is a similar level of psychological and worldly horror with these and family is at the center.

Layers of Fear & The Silent Patient

Layers of Fear is a game that was really hard to play. Like, physically. Because you just know that any room you enter might slam a door behind you, cast eerie shadows, throw apples at you be bad, or just do something totally unexpected (therefore constantly smashing your “jump off the couch and toss your pillows” button). And that was just from the haunted house scares, there’s not much you can do about the horrors of the character we play or their family. The game is filled with the unexpected, all while the main character…works through some things. As does Theo Faber, our main character in The Silent Patient by Alex Michaeledis. Theo has taken a job as a psychotherapist where he aims to get close to a patient that supposedly killed her husband and then stopped speaking immediately after. Theo wants to see if he can get her to tell him her story. Now, I won’t give away any twists with either of these (like the name of the protagonist in Layers), but trust me when I say that they are there. And these stories & their endings have stuck with me- vividly- for several years now.

Last but certainly not least, is Resident Evil 8. And I can hear you now (if you know anything about RE8) asking “but can one book really fit all of Res 8?” and the simple answer is no. Consider this a bonus section of recommendations. The longer answer is that, technically, this game plays out over 4 “acts” (very much related to the “Four Houses” of the game) not including the intro and finale of the game. Village is the 8th in a series, but you really only need to know that our protagonist, Ethan Winters, fought his wife’s toxin-hyped family in their creepy house in the previous game (Resident Evil 7: Biohazard) to get her back. And now, in RE8, Ethan & Mia are raising their daughter in a Transylvanian-like village (aka “a remote eastern European village”). All is peaceful too, until you’re kidnapped and left stranded somewhere in the woods outside of said creepy town. To be fair to RE8, this game needs more than one book recommendation because it is heavily inspired from many gothic classics. I will try to be truthful about all that happens in REVillage, but again I will keep things spoiler free and vague as possible.

RE8 starts and follows an objective similar to The Lost Village by Camilla Sten. There’s much exploring of decrepit houses, occasionally revealing photos or other useful items, and then the first “act” really starts. The first “Act” of the game (the one with Lady Dimitrescu) is very inspired by Dracula, but also may find fans with Dowry of Blood by S.T. Gibson. “Act 2,” where we meet Donna Beneviento, pulls inspiration from works like The Haunted Dolls’ House by M.R. James and works by Shirley Jackson such as We Have Always Lived in the Castle and The Haunting of Hill House (but with way more porcelain dolls and much more creep-factor) and therefore will find fans with Night of the Mannequins by Stephen Graham Jones. “Act 3,” where we meet Salvatore Moreau, is pulling from The Island of Dr. Moreau by HG Wells but may also find fans with Lakewood by Megan Giddings. “Act 4,” where we meet Karl Heisenberg, is a little Strange Case of Dr. Jekyll and Mr. Hyde by Robert Louis Stevenson, a little Tell-Tale Heart (Edgar Allan Poe), and really it’s own thing (there’s really no comparison for an airplane monster-man or a farm tractor monster-man). If I had to pick a modern horror to relate to the “Heisenberg” section I would pick A Cosmology of Monsters by Shaun Hamill (because it’s tongue-in-cheek like he is) or something by Stephen King, like Salem’s Lot, something with monsters and greater conversations about the morally grey complexities of humans and our choices. And then the acts return to the regularly scheduled Mistress of Gothic Monsters, the thread that connects all of the “acts” and begins the end of the game.

This spooky season I am looking forward to reading Nothing But Blackened Teeth by Cassandra Khaw and The Death of Jane Lawrence by Caitlin Starling. I also plan to play Lost in Random (which gives me Alice Into the Madness and Coraline vibes) and the Alan Wake remaster.