I think librarians can all agree that consulting an expert on a subject is a good way to gather information about an unfamiliar topic. Keeping that in mind, I went to my experts—the gaming community in the La Crosse area—for help planning the second International Games Day at the La Crosse (WI) Public Library.

The great thing about gaming is the wide variety of choices available including video games, card games, board games, and roleplaying games. Giving patrons opportunities to try out games is what IGD is all about! The difficult thing is that it can be very overwhelming to plan if you are not a regular gamer. Don’t get me wrong, I love games and have played lots of them from standards such as Connect Four to more complicated Euro Games, but it takes a special type of person to be able to teach others the ins and outs of these games. 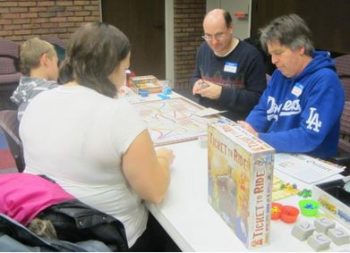 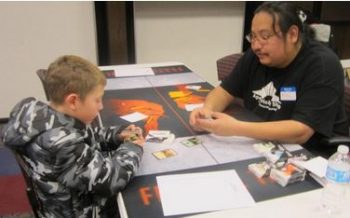 Difficult to plan you say? Challenge accepted! Time to pull in the local gaming community! To plan our IGD, I pulled in experts from four local game stores who specialize in board games, card games, and video games. I also got help from two local gaming clubs. These volunteers know what games are hot, and better yet, they can bring a collection of awesome games along. During our IGD they helped teach popular games like Ticket to Ride, Magic the Gathering, Street Fighter, Suspend, and Word on the Street. Best of all, they were able to let the patrons know what an active gaming community we have in the region.

How can you find these sorts of groups in your area?

The key is having people who are passionate about a game and willing to teach it to someone else. 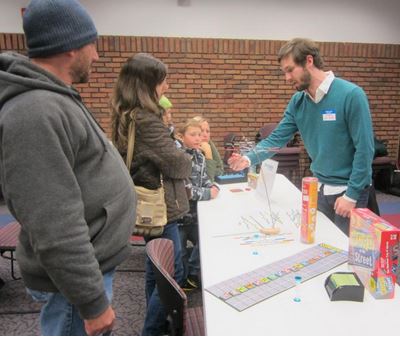 What can game experts do for you?

It was great to have help at the event and to have people who share excitement and expertise about all types of games. 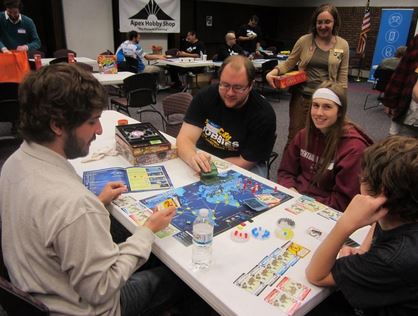 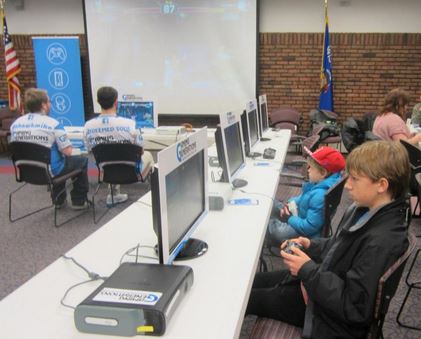 The collaborations that began as part of IGD have also spurred other events in our community. For example, the library has collaborated on Free Comic Book Day and is now holding gaming nights during the summer. Likewise, the atmosphere of collaboration has helped to create two big community events—a Comic Con at the La Crosse Public Library and a gaming convention at the University of Wisconsin-La Crosse called Coulee Con.

Maria Hertel is aging up in her library career! She has served everyone from babies to adults as a children’s librarian, teen librarian, and at the college level at libraries across Wisconsin and Illinois. She is beginning her third year as a Reference Librarian at the La Crosse (WI) Public Library.