2014 was not the first year Loudoun County Public Library (LCPL) participated in International Games Day, but it was the first year that all branches partook in the celebration. The unified support of IGD commenced in Minecraft community builds, family board game programs, a strategy game competition, and a Lego and Duplo family build extravaganza. The programs brought in dozens of children, teens, and families who learned new games, and played old favorites. The biggest change to LCPL’s IGD celebration was in the enthusiastic staff, and a friend-of-a-friend who was looking for just the right time and place to kick-off a gaming club.

Eric, a local board game enthusiast, approached LCPL with the concept of a community-supported partnership that would introduce games to the general public as a cultural activity.  Games in libraries are hardly a new thing, but it appeared to him that many of these items intimidated patrons and they weren’t being fully utilized. So, on a beautiful fall morning in 2014 we met to brainstorm how local gamers could help LCPL with the upcoming IGD events planned at some of the branches.  Eric had long wanted to start a club to introduce modern board games to a wider audience but had no location to host programs and no captive audience – both of which LCPL had plenty of. We considered this a wonderful opportunity for a trial run. 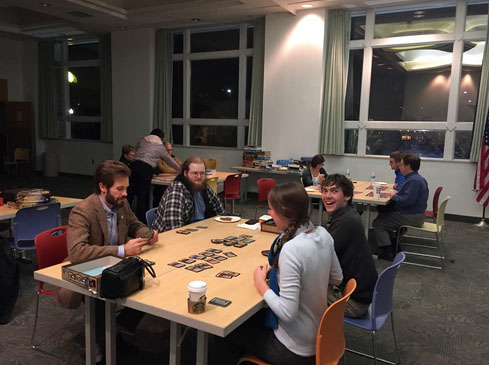 Volunteers were happy to attend the pre-planned events as gaming specialists and helpers and some even hosted programs at the branches that did not already have anything planned. Within a week all of the branches had something on the calendar for IGD. One week later, successful IGD programs were hosted, and game programs began to fill up the library’s calendar – some run by staff, others by volunteers.  We declared success and found we had enough support to schedule regular events at local branches. Loudoun Tabletop Game Masters (LTGM) was born. 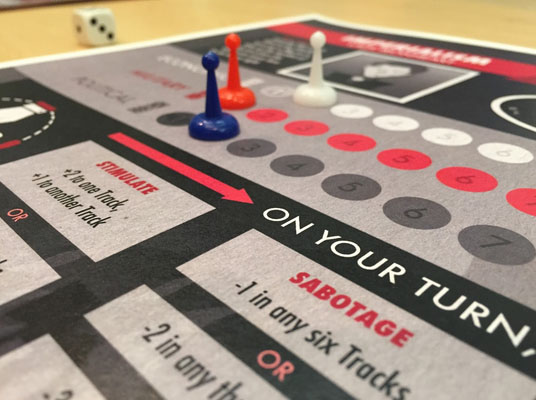 As partners in gaming in libraries, LTGM focuses on collapsing the barriers to play. It’s not far from the act of introducing a challenging book, except that other people are an essential element. In practical terms, this means gathering a group (2-6 people); matching patrons with an appropriate title; and, a ‘soft’ play-session that bypasses the need to study a rulebook. LTGM also gives advice to library staff on which games to buy or replace; which most appeal to particular age groups; and which are suited to the timeframe of a library program. Most importantly, though, LTGM help staff understand the “why” behind gaming. Their knowledge and interest in games make them the perfect hosts and partners. Here are some of the things library staff has learned since partnering with LTGM:

1) Forget everything you remember (or, remember hating) about Chess and Monopoly. In 2014, the Guardian declared a ‘golden age of gaming.’   Modern board games are artfully balanced affairs that proudly bear their designers names on the box. High interactivity, beautiful art, streamlined rules, reasonable playtimes, integrated narratives (that also facilitate the learning of rules), and limited downtime are the norm. Stodgy train and economic games are still available, and worth investigating for those interested in the hobby, but you can now have your Zombie clichés and play them (see Dead of Winter).

2) Staff involvement is key. LGTM focuses on finding and organizing people who want to teach games and communicates primarily via a meetup group. This is by design because it’s difficult to find sociable people who are able and willing to share the hobby with the general public.  Therefore, additional communication channels are needed to attract patrons to events (see the following point for some helpful tips on promotion.)  In our experience, when this works it really works – board gaming events that are promoted and supported by library staff attract around 3x times the patrons, meaning 30-40 people for larger events.

3) Marketing and promoting your game programs requires thoughtful planning. Make posters featuring a picture of a representative game, and the program name and schedule. If you call your program Settlers of Catan or Survive!, you will lose potential participants who don’t know that particular game. If instead, you name the program Introduction to Modern Board Games or Board Gaming for Teens, you will attract all levels of players and library patrons. Relegate the names of specific games to the schedule of events on the poster. Don’t let your desire to have a catchy name keep you from reaching your full potential with a gaming program. At best, you will attract the ‘hardcore’ enthusiasts who already know the games. At worst, no one will show up because they cannot tell what kind of program you’re hosting.

4) Games market themselves if properly displayed. The art and illustrations are eye-catching and bold, so don’t relegate them to the back of a closet only accessible by staff (if they even remember that the library owns games). Put a barcode or spine label on the game boxes and put them somewhere visible! Are you uncomfortable leaving them out in the open where a child might find the small pieces appetizing? Display the games on a high shelf on book easels. Or put them on a cart you can roll after other age-appropriate programs as your way of saying, “Hey, don’t rush away. Stick around for a while and play a game.” With few exceptions, games do not require staff supervision, so give them space to play and mosey on over once in a while to check on them.

5) Proper storage is important. Don’t stack games horizontally, on top of one another, unless you like tipsy towers, broken boxes, and scattered components. Game boxes are designed to store vertically, like books.  The current standard, ‘medium’ box is 11.7  x 11.7 x 2.8 inches (there are lots of exceptions, also akin to books), so find a shelf that is about a foot deep, if possible. Additionally, for games with lots of pieces, cheap, plastic organizers, that fit inside the box, makes games faster to set-up, clean-up, and inventory. For card games or just games with cards, card sleeves are another recommended housekeeping supply that can extend the life of components 10-fold. If this seems like a lot of work, many patrons are happy to help with these tasks if given the necessary supplies.

6) Games are inexpensive on a per-use basis, and relatively durable. One modern game will cost anywhere between $20-$80, but if four people play it twice a week for a year, the cost-per-use is pennies. You may be concerned about all of the pieces. What happens when you lose a die? (Go buy more, or keep extras on hand.) What if a card rips? (Tape it back together, or scan and copy it onto heavy paper – remember, sleeves fix this problem.) What if a necessary piece goes missing? (The world might end.) Worst-case: you bought a game and it was a dud or essential pieces went missing quickly. How is that different from a brand new book?

Remember: Library materials are routinely injured and defaced, but you would never consider not buying new books for the shelves, right? Think of games as a necessary library material and you will soon get over your fears.

7) Patrons love to play. Psychology Today recently profiled A Playful Path, a new book by Bernard DeKoven that examines playfulness as an essential, yet oft-neglected human trait. The belief is that game is just a pretense – most readers can remember the joy of discovering and ‘figuring-out’ tic-tac-toe. In fact, competition isn’t even necessary – many modern games are fully cooperative. Most adults can remember learning that ‘winning’ is often less important than being, and experiencing, a good opponent. The point is that playing is an end in itself, but this is a hallmark of cultural and artistic experience. When the vision of a library expands beyond literacy and information access, cultural experiences move naturally to the forefront.

So, games are art. We hope this conclusion came as a surprise. Aside from the vivid and fun illustrations, the modern game designer creates experiences that the most (or least) discerning of library patrons can understand and appreciate. We hope that it motivates you to organize a group, sit down, and play more games! 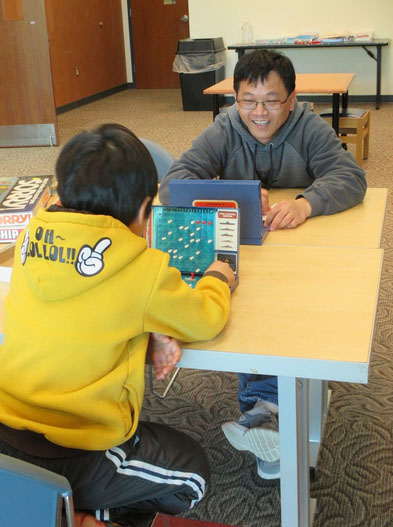 April Shroeder is the Youth Programming Coordinator for Loudoun County (VA) Public Library. Formerly a Teen Services Librarian, April has extensive experience serving teens and finding community partners who wish to do the same. You can contact April at april.shroeder@Loudoun.gov

Eric Groo is an aspiring maestro of play, father of two, Cub-Scout leader, and Rotary member. He founded the Loudoun County Game Masters because he believes ‘games are good for people.’ During the day he works as a blue-collar statistician. You can contact Eric at eric.groo@gmail.com