This year’s verdict: gaming in libraries remains a powerful service.

Despite lower numbers due to the election (many library meeting rooms were booked for early voting) and a SuperStorm that devastated communities in the northeast, the stories from the libraries that participated illustrate why we do this.

As in past years, though, it’s really the stories that define the day. This year the impact of gaming in libraries was brought home in a particularly strong way by those northeastern libraries that still tried to provide games for their patrons. Five libraries reported what happened at their pared-down IGD12 events. Here are two of them:

So many of the libraries reported these types of stories of positive interactions between kids who previously didn’t know each other, families playing together, games solidifying relationships between staff and patrons, and more. A small sample of this year’s comments:

Many libraries again reported that they couldn’t have offered Games Day activities without the generous donations from this year’s sponsors, Ravensburger (Labyrinth), PopCap (Bookworm), and GameTable Online. We thank all of our sponsors, and we know libraries will use the donations for many years to come to provide fun and learning for their patrons. 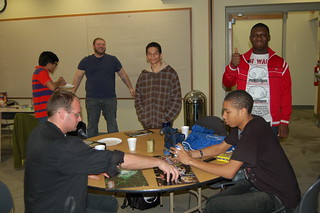 Put Saturday, November 2 16, 2013, on your calendar now for IGD13. We’ll be starting work on next year’s event soon, so watch here for updates.