It’s 10:50 am on November 15th. We all scramble around plugging each controller in, testing each mouse, setting up board game pieces, and finishing all the final touches before the International Games Day festivities begin. This is our first International Games Day, and we are all hoping that the countless hours we have all put in will pay off with smiling faces, lots of laughter, and record numbers for our gaming programming. As 11:00 am hits, we all take a deep breath and open the doors to let the games begin.

Fondulac District Library is situated in central Illinois and sits right across the river from Peoria, the third largest metropolitan area outside of Chicagoland. Our library population sits right around 22,750, and we have around 9,830 current patrons with cards. We had hosted one other large games day and decided to do a similar program for International Games Day. We try to offer a wide variety of games to interest gamers at all levels. We had six areas which patrons were encouraged to move between. The library was open from 9-5 that day, but our International Games Day went from 11am-4pm.

The first area was the Board Game Room. Fondulac Library has around 40 board and card games for patrons to play on site. We pulled them into our largest meeting room and made them all available for patrons to play. In one corner of this room, we had a volunteer running Pathfinder demos, as well as Magic the Gathering demos. This room was also staffed with librarians and volunteers that had experience playing most to the games we offer. 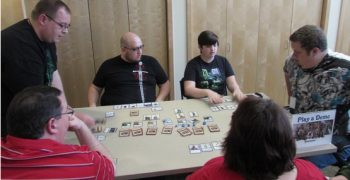 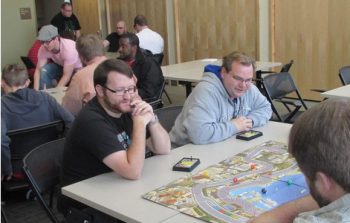 In our atrium, we set up seven different gaming stations. Our systems included the Atari, WiiU, Steam, PS3, PS4, N64, and an Ouya. We limited the games which could be played on these systems to a few to make things a little more streamlined. We placed timers and sign in sheets at each station in case of lines and time issues. This was only needed at our busiest times. 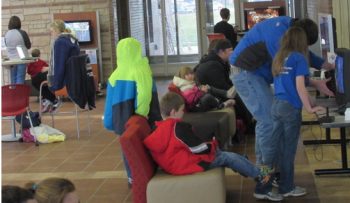 Our library has a group of regular Yu-Gi-Oh! players. We gave these patrons their own little area, we referred to as the Yu-Gi-Oh! Café. They could play each other, and when those interested approached, they would share the basic rules with the patron. We had a great box sent to us by Konami, which had demo decks and player mats that were very useful to get people interested in Yu-Gi-Oh! 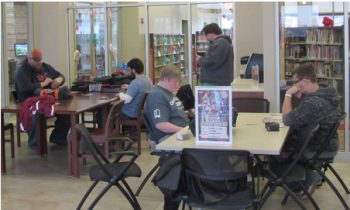 We also opened the children’s department for a couple great activities. In the story and craft room tables were set up, and games, appropriate for children or families, were put out for patrons to play. We also had an amazing game of human-sized Candy Land. Our librarians placed fun colored tiles on the floor and decorated the whole department with Candy Land themed decorations. Patrons would stop at the information desk to pick up a portable spinner and would spin their way through the Candy Land course.

Last but not least, we launched our Minecraft server for International Games Day. Our board room was completely decked out with Minecraft decorations and set up with 7 laptops which the patrons could play on. Patrons could explore and play together on our new server. Our library has invested in 6 Minecraft accounts. Patrons could play on their account if they preferred, or they could use the accounts we had purchased. 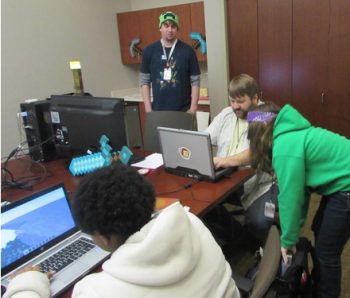 As you entered the library we had a volunteer staffed welcome desk. At the desk, you were handed a flier, which listed all the activities hosted for the day. You could also register for the prize drawings. We had 3 separate prize packs, a child prize pack, an adult prize pack, and a Minecraft prize pack. We ultimately had around 117 attend our program. Though we were shooting for around 150, we were happy with our numbers. Our library sponsored Super Games Day, and International Games Day programming has been our highest attended program library-wide, with the exception of Star Wars Day.

Laura Warren: Laura Warren is full-time Adult Services Assistant. She has her Master’s Degree in Cultural Anthropology and is in charge of the Local History Collection. She has been a gamer for many years, and implementing a successful gaming program into our library is one of her passions.

Jimi Roberts: Jimi Roberts is a part-time Circulation Assistant at Fondulac District Library.  Outside of work, he is an avid PC gamer, board game enthusiast and tabletop miniature painter (and occasional player).  He also enjoys singing Native American Drum music and dancing at powwows and festivals.