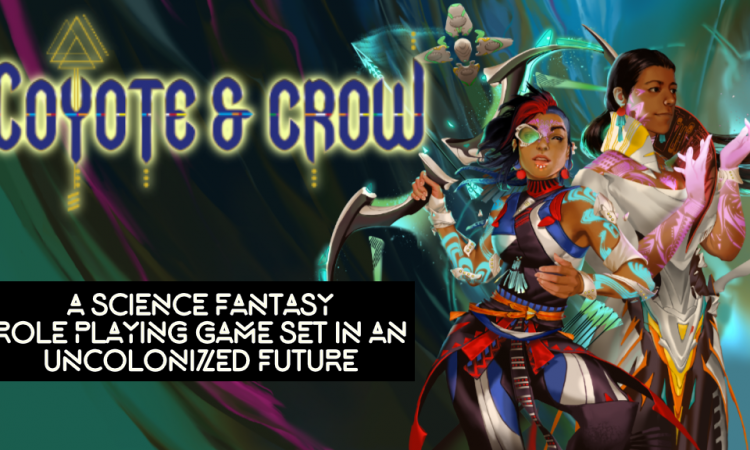 Connor Alexander is a citizen of the Cherokee Nation. He is the owner of Coyote and Crow Games and the creator of the role-playing game, Coyote and Crow. In the successful crowdfunding for Coyote and Crow was an option to donate a copy to a public library. As a result, Connor has many copies of the beautiful hardback game with full color art, ready to be shipped to public libraries. If you are a librarian, please contact Connor at this link and grab a copy of this amazing game for your patrons.

Judd: Welcome, Connor. If you were to walk into a library and Coyote and Crow was on display with other books, what would you like to see on the table with your game?

Connor: As far as fiction, I love being tied to authors like Rebecca Roanhorse of Stephen Graham Jones – Indigenous authors who are out there putting in the work to tell different Indigenous stories.

There are alot of contemporary, modern fiction Indigenous writers, who are writing really fascinating stuff but it is often set in our current world in a way that has to address real world Indigenous issues and problems. It can be exhausting. It is a necessary process, of course. We all just want a little bit of an escape – a little fantasy.

Other folks outside of indigeneaty – I love N.K. Jemisin. Being anywhere near those folks would be a huge honor.

And other role-playing games…I know role-playing games are a newer niche for some libraries. If I am anywhere near anything that Monte Cook Games or Green Ronin Games are putting out that is great. Those folks are doing the good work of presenting progressive, modern, interesting worlds.

Judd: When I read Coyote and Crow, I was expecting a sparkling utopia, but it is a place with its share of conflicts and problems – there is lots of room for adventure in there.

Connor: Thank you for saying that, because I’ve had a few people refer to it as a utopia and to put it bluntly, that pisses me off. People’s standards for what a utopia is skewed right now. The idea that everyone having basic housing and food and decent living conditions but that is not the definition of a utopia. I definitely wanted to create a space where they could be conflict, drama and epic stories and maybe parallels to modern indigenous issues. I’m going to leave that to up to individual story-guides to tell because I want them to frame those decisions on their own. I think I’ve set it up so that there are plenty of opportunities for political intrigue or monster of the week stories.

Judd: How would you recommend a librarian who wants to get Coyote and Crow to the table but they only have one hour or maybe two hours set aside for their program?

Connor:  There is a parallel to be had with hobby stores that have in-store play-spaces. I used to run a league for a card game called Android Netrunner. Folks need a cheerleader for that program. They need someone who is a vocal spokesperson for the game.

I am proud of Coyote and Crow but it is a 500 page book and that can be intimidating. It is not an introductory game.

At our web-site we have a rules-lite introduction that is free to download. It has very simplified rules. All you need is six-sided dice and everything else is provided for you. It is very linear, not like a regular role-playing game session, you can literally just go from top down for the whole story. It plays up to four players.

That is a good start.

Judd: I was excited to see that the game uses d12’s.

Connor: Yes, I think it is the most underappreciated die among the standard polyhedrals. I have a sort of nerdy love of pop culture thoughts about math. When I started reading about base twelve. I started getting fascinated with that. No one was using that as an in-world thought process. What a way to get away from colonization than to get away from base ten and jump over to base twelve as a way of getting people to think a little differently.

Judd: Can you talk about the app?

Connor: We were lucky enough to hit a stretch goal where we got a really good app built. It has the Chawhee name generator which is our in-game fictional language. So, folks who want to name a town or person they can make something that is logical in the setting.

Judd: What can you tell us about the novel set in Coyote and Crow’s world?

Connor: I want younger Native kids to have a story that they can latch onto that leads into this universe and into further good fiction.

We’ve got a women in the roles of editor and writer and three character who are women in this story. I am pretty excited about that. It is a story that I really appreciate. It is a good way to introduce folks to the Coyote and Crow world, following two characters who are going through the adanadi ceremony, which is a kind of fantastical process – ceremony, scientific process that is connected to growing into adulthood and the way your perspectives change as you become an adult.

Judd: The map is really interesting. Could you talk more about that?

Connor: It was strange to take a real geographic location and make a fictional version of it. We started with a Google Image of it and I gave it to the cartographer and I paired the cartographer, who was not Indigenous with one of our writers, who is Indigenous. I said, “Work together, here, and give me a fictional version of this city. Here’s the concept art for Cahokia. Here are the historical ideas about what Cahokia was like and let’s build on that. Let’s grow that out in a way that doesn’t mirror European city grown.”

We wanted something more organic, more spread out, more alive. In doing some research for the book so much of what we consider modern cities are built on feudal concepts of what towns were. Indigenous folks weren’t going to have castles built around lords, expanding in concentric rings around towers. There isn’t as much height and it is more spread out, more organic and more green. It is more public transportation-centric – no jammed freeways.

The waterways are very important. One of the big criticisms from *ahem* light-skinned folks who are not friendly to Natives (I’ll put it that way) is that Natives didn’t have roads. They didn’t need roads because we had waterways. I love that the river is at the heart of Kahokia. It has a very organic feel.

The other book that was great was Four Lost Cities: A Secret History of the Urban Age by Annalee Newitz.

Want to write something for our blog? Drop us a line: GameRT@ala.org.