So your library has decided to acquire some games for patrons to use – YAY!

That’s great, right up until you find yourself in your local games store, completely overwhelmed by the sheer number of games on offer. Sure you’ve grabbed a copy of Settlers of Catan because you’ve heard that “everyone should have a copy,” Carcassonne because “it’s just not a collection unless you have it too,” and Ticket to Ride because, uh, trains. But how do you keep selecting games that are right for your library?

Here are a few simple questions to consider when making that choosing games for your library:

Sometimes it’s easy to spot a game that would upset people, but what about something like Cards Against Humanity?

Even though this card game is insanely popular I not only don’t recommend getting a copy, I try to prevent library members from bringing it in. It’s a polarising game that could upset new players or other library users. A little research before your purchase can help avoid this scenario. Board Game Geek has information about most games and there are plenty of reviewers online that can not only help you work out whether a game is suitable but also introduce you to great games you might not otherwise have heard about. My go-to reviewers are Shut Up and Sit Down, Starlit Citadel, and The Dice Tower but it’s worth finding the reviewer who shares you and your members’ gaming interests.

Oh, and if you keep getting requests for Cards Against Humanity, there are less confronting alternatives that use the same mechanics, such as Punderdome or (particularly appropriate for libraries) Bring Your Own Book. 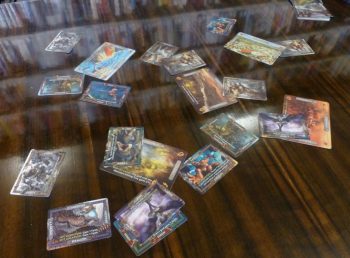 Pretty much everyone agrees Jenga is a fun game – when you’re playing it. But when you’re trying to read and are suddenly startled by the sound of 54 toppling wooden blocks it’s not as fun. For smaller libraries, a game like Two Rooms and a Boom, which has players separating into two groups far enough apart to not hear each other, might get in the way of other members browsing and working.

This will be different for every library, and there is an element of trial and error involved but early on it’s best to stick to games that don’t push either of these elements too far. If you want to start testing the waters you could trial Zombie Dice, as the sound of the dice can be muffled if it turns out to be too loud, and Monstrous, which has players moving about but restricts this movement to a limited playing area around a single table.

We were lucky enough to score Monstrous for our library thanks to IGD donations last year.

Unfortunately, it can be all too easy for a player or two to find themselves not enjoying a game. This can happen for a number of reasons, from realising you’re going to lose 15 minutes into a three-hour game to having angered the Dice Gods and rolling nothing useful 17 rounds in a row.

A great way to help overcome this is to have some cooperative games in your collection. These are games where the players are all on the same team, trying to beat the mechanics of the game itself. Because players are working together everyone wins or loses together, which means that no matter the outcome there’s a sense of camaraderie. Probably the best known cooperative game is Pandemic, although there are plenty of others if you find your members enjoy this style of game. You could try Hanabi, Forbidden Island, Agents of SMERSH, or (my personal favourite) Yggdrasil.

Be aware, though, that cooperative games shouldn’t be used as an alternative to the traditional games pitting player against player. If that’s all you’re offering people will soon get bored.

It isn’t just balancing how many of your games are cooperative that makes your collection work: every game has a minimum and a maximum number of players, an approximate playing time, and a set of rules that’s harder or easier to learn. It is about having a range of game types in your collection to help ensure people don’t get bored.

If you already have a number of longer games in your collection, especially ones that include player elimination, it’s a good idea to invest in some small, quick games that people can play while waiting for a longer one to finish. Examples of these include Love Letter, Sushi Go, Tsuro, and Chronology – all of which can be played in under 20 minutes and have relatively simple rules. 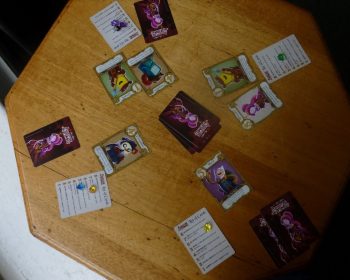 Like many popular games, Love Letter has been reskinned many times, our library’s copy is Adventure Time themed. If you have lots of games with extensive set-up times than something simpler like String Railway or Dixit might be a good addition. If you already have plenty of these simpler games then it might be worth investing in something like Galaxy Trucker or Libertalia.

The number of players is also an important consideration because although games like Saboteur or The Resistance can accommodate up to 10 players they can struggle with lower numbers and can’t be played if only three people turn up. It’s also nice to have the option to occasionally split large groups up between multiple two to four player games like Splendor, Takenoko, and Alchemists.

Generally, it’s good to have a range of games for people to try but make sure you’re developing the parts of the collection that are being used. Just because you have five deck building games doing well doesn’t mean you need five hidden role games, but it probably is worth having one there for folks to try occasionally.

This is the most important question of all, and you shouldn’t be asking yourself this but the people in your library who will be playing the games. Does the theme interest them? What mechanics do they prefer? Are they only interested because they saw Wil Wheaton playing it online? All of these can help focus your investigation of the available games.

There’s also a wealth of knowledge in the staff at your local gaming store. They’ll have suggestions about what games would complement your collection and will be able to take vague requests from library users and recommend specific, high-quality games.

When it gets down to it, the main message is to consider the needs of your library and its members and build your collection around that, but make sure there is enough variety to keep people coming back. Happy gaming and may your dice roll nothing but 20s, unless you’re the DM (then kindly only roll 3s, thanks).

James enjoys playing games and also enjoys working as a librarian at the Melbourne Athenaeum Library. He has been lucky enough to have these intersect as the convenor of the monthly games days being run in the library.