I started playing tabletop games with friends around 2007, and I attended my first GenCon (the best four days in gaming!) in August 2013 as a very casual gamer.  My main enticement to attend GenCon was Trade Day, a day dedicated to the professional development of retailers, educators, and librarians. I’m a complete sucker for a day of professional development!  It was at a workshop led by Beth Pintal from the Indianapolis Public Library that I learned about tabletop gaming in public libraries.  During the rest of GenCon, I was exposed to the wide variety of tabletop games and the broad audience that they can reach and was completely inspired.

When I got back to work, I was eager to bring gaming to the Orion Township Public Library.  I explained to my direct supervisor, the head of Adult Services, what I wanted to do and she gave me her approval to try.  I scheduled our first game day for the following April as part of International TableTop Day 2014 and got to work.  I had zero budget with which to work, so I did something that I think librarians are excellent at—I asked for help!  I went through the list of game manufacturers that I saw at GenCon and reached out to them asking if they would be willing to donate games to a library.  I emailed and called, explaining what I hoped to accomplish with their donations and I was overwhelmed with the responses I received.  Within weeks boxes began to pour into our library full of donations!  I had a great collection to start our tabletop gaming programs. 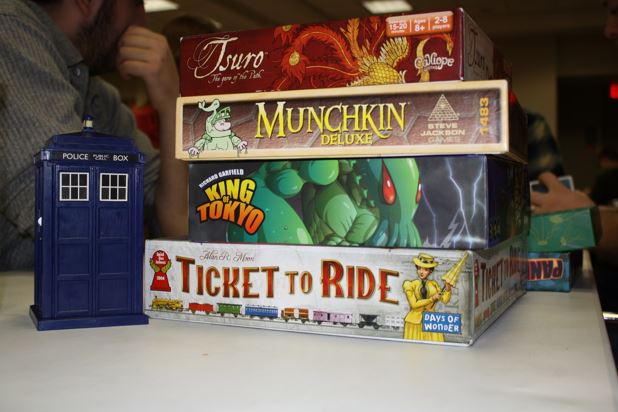 I also encouraged patrons to bring their own games to play with others at our Game Day events.  I find that a lot of gamers have collections and really enjoy sharing their favorite games with others.  This was a great idea as several patrons showed up to my first game day with plastic bins full of games to play! I also developed partnerships with a game store in the area and the local high school’s Game Club and Board Game Design Class.  Both the store and the school have lent games to the library for use during our programs, allowing us to offer a broader selection of games each time. 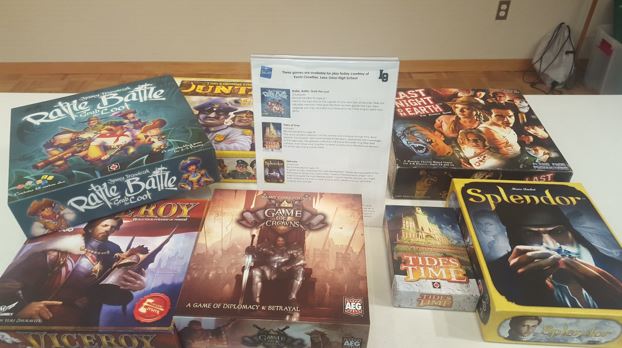 We also asked our patrons to donate games to the library—with the caveat that they may not be added to the collection, in which case we would pass the donation on to the Friends of the Library.  This was great, because although there were donations with missing pieces, we did receive some usable games.

The first Game Day program was very successful and I was given permission to ask the Friends of the Library for a small sum of money to help round out our collection.  They gave me $300 to work with.  I researched games and bargain shopped to find as many games as I could that I thought would appeal to our patrons.  As our program has grown, each Game Day has been very successful, with many patrons returning each time and asking when the next one is! 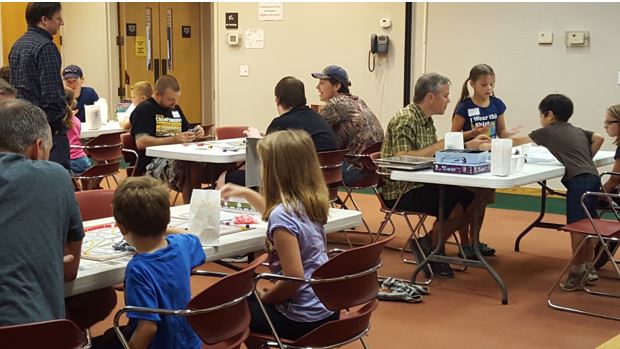 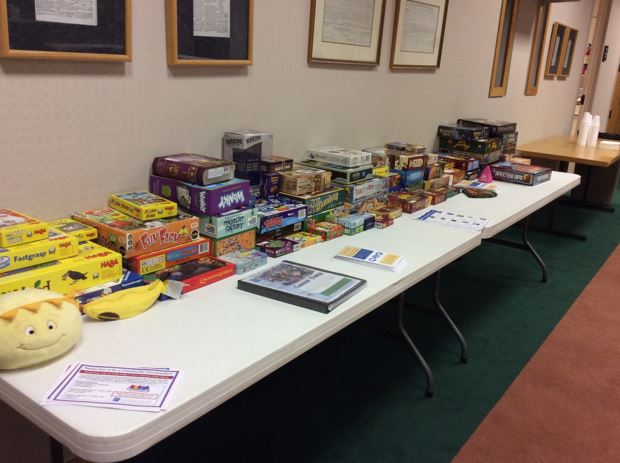 Through all this, I keep asking for donations any chance I get.  Attending conventions, big or small, and meeting game designers face-to-face is one of the best ways to get free games.  I am blatant when it comes to doing this.  I will walk up to a booth, hand over my business card, and basically say “Hi, I’m a librarian, we have game day programs and a circulating game collection; can I have free games?”  And it works more often than not!  I have even asked point-blank for the copy they were using to demo during the convention—and received it!  But I also found that reaching out to companies via email and phone is just as effective.  These companies want their games to be played and having them in libraries is great publicity.  It can’t hurt to ask, the worst that can happen is someone will say “no.”  But, from my experience, a lot more will say “yes.”

Gina Crowther is the Outreach Services Coordinator at the Orion Township Public Library in Lake Orion, Michigan.  She loves to share the world of games and geek with as many people as possible.