I based my teen program on the popular board game Clue, but I made it Live Clue.

The game setup was cheap but took time and required a large room. To set the stage, our auditorium has a linoleum tile floor, each tile being a square foot. Using colored masking tape, I mapped out the floor of the auditorium to be identical to the Clue game board’s rooms inside the mansion and outlined the squares for the game pieces to move. Then I added life-sized furniture to each of the mansion’s rooms. I also recreated the game cards, increasing the size of the game cards to 8 x 11, and issued clipboards to the players to hold their clues. 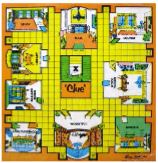 My trip to the Goodwill store yielded inexpensive costumes and accessories for each of the six players in colors that matched their character names: Miss Scarlet, Colonel Mustard, Mrs. White, Reverend Green, Mrs. Peacock and Professor Plum.  Our local police station donated evidence tags and fingerprinting accessories that added to the experience. The players used life-sized weapons for the game’s markers – quite literally I gathered a big plumber’s wrench, a cap gun (with caps!), a thick rope, a dagger (a plastic sword that I cut down to dagger-size), a lead pipe and a massive brass candlestick holder. The photo below shows all of my game props. 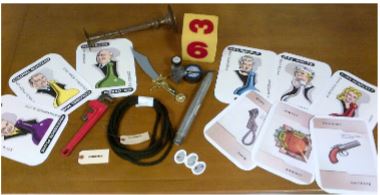 The gameplay was identical to the original game except that live players replaced the markers. I played a butler who was their game host and I ensured proper gameplay. In the photo above, I’m holding a candlestick with a large foam die; after a roll, the players would move one tile at a time, just like in regular gameplay. Also in the photo is Kristen Arnett, my assistant, who was Ms. Scarlett, and Dylan, Brianna, and Emily, who are also in costume and holding their game cards.

Half the teens had to wait their turn to play the game. While waiting, they played some board games, watched the Live Clue game and enjoyed eating pizza and drinking soda. 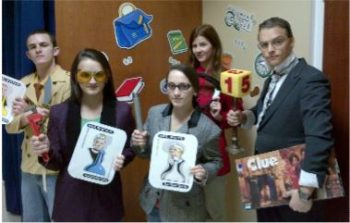 The game winners all received a Clue game and all other attendees/participants simply won the right to eat and drink all of the refreshments.

Our guest post this week is from librarian Jonathan Dolce, the Head of the Children’s Library at Athens-Clare County Library. His professional library career began in 2000 at the Volusia County Library system, where he worked as a young adult librarian and earned their Employee of Year commendation. He later spent four years as Head of Youth Services for Maitland Public Library. He keeps active in the professional librarian community by presenting break-out sessions and by taking part in poster sessions at FLA and the 2015 GCBA convention.