One aspect of playing games is that we can do things in games that we cannot—for a variety of reasons—do in real life. We become fighters, adventurers, characters with distinct motivations and abilities to our actual selves. For example, even if we can’t fly in real life, we might be able to in a game. Or maybe we develop ninja-like fighting skills, while in real life we are horribly uncoordinated.

Notice that the examples I give about are cases where we’re limited by physical boundaries. But what about moral considerations? Just because there are games where we can kill, backstab, steal, and rape, does this mean that we should do those things? What do our moral decisions in games tell us about what kinds of people we are?

You might think “But of course you can do those things. It’s a game!”, but this response might be too narrow. Consider the video game Grand Theft Auto V, a game over which much ink has been spilled for this very reason. At its heart, GTAV is a game about as many morally repugnant actions (from a real-world perspective) as you can imagine. You guide Trevor, a literal psychopath through a series of violent rampages, from drug deals to assassinations and even torture minigames. Even when you’re not on a mission, you’re free to run down pedestrians, steal cars, and beat people to death. 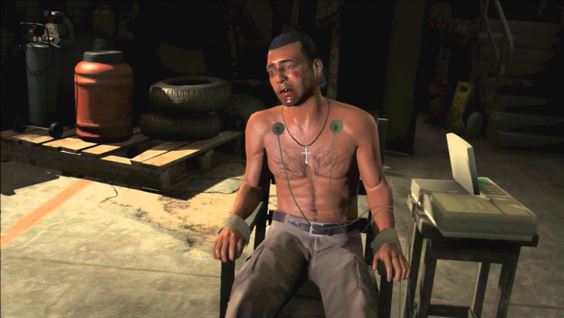 Some games are even designed so that you do morally questionable actions. GTAV is one such game. But even Dungeons and Dragons (especially if your character is chaotic, or evil, or both) requires players to lie, steal and kill in order to advance. And the gameplay in games such as Diplomacy or The Resistance relies on players threatening others or being underhanded in order to succeed. Presumably, such traits are not desirable in real life. And Cards Against Humanity literally bills itself as “a game for terrible people”, with topics such as rape, transmisogyny, disability, racism and sexism on the table as the subjects of jokes. 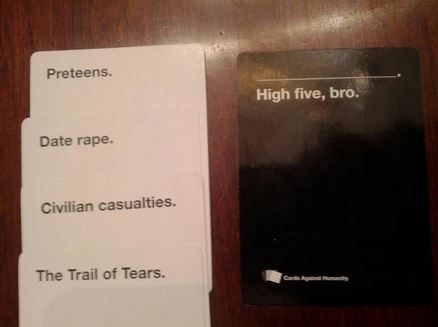 Of course, part of the appeal of games like these is that you can do these things in the first place without consequence. Part of the fun of the games in the GTA series is precisely because you can commit morally reprehensible acts in an environment where nobody gets hurt. You are, after all, not imposing actual harm, and it’s on a series of pixels anyway. Likewise, in D&D, you’re not really harming kobolds (or orcs, or peasants, or whatever) because they’re existing in a fictional universe. It’s not like real kobolds are taking damage from your real weapons!

A player’s moral system does not always follow them into their game. Nor should it—after all, games are supposed to be fun! But at the same time, how one plays a game can be instructive in the type of person they are. Insofar as our actions and decisions can reveal our motivations, personalities, and moral compass, picking the amoral course of action in a game might have consequences after all. Now, this is not to say that all games have these consequences, but for the handful that do, this can be a tricky issue.

The German moral philosopher Immanuel Kant is known for his work on action-based moral theories, and has a quote which might shed some light on this issue: “If a man shoots his dog because the animal is no longer capable of service, he does not fail in his duty to the dog… but his act is inhuman and damages in himself that humanity which it is his duty to show towards mankind.”

Although this quote is in the context of what moral duties (if any) Kant thought we had towards animals, it fits into the broader structure of his moral theories by focusing the determinant of morality on how we act. Kant’s best-known moral principle, the Categorical Imperative, is also an instance of this: the best action is the one that we can universalize to everyone doing. So for example, if we are trying to decide whether lying is a morally acceptable action, we would imagine a world where everyone lied. If such a world would be untenable—and it probably is, due to the lack of social trust—then “you ought to lie” is not a principle that can be universalizable, and therefore lying is not a moral course of action.

In our case, if we are wantonly killing, torturing and stealing in a game, it could be argued that we too are damaging our humanity which we have a duty to show. Even if no actual harm is being done, we are making it known that we are (at least potentially) terrible people.

Some players are becoming more attuned to these issues. For example, Cards Against Humanity has been criticized recently for how much it punches down it does on minorities and on sensitive social issues from a position of white, male privilege, which has led to the removal of certain cards from the CAH deck. Of course, playing CAH is usually a fun experience where you try to be more lewd and offensive than your friends, but the fact that you sometimes has to take a moment to check whether the card you’re about to play could actually be hurtful to other people (for example, if you don’t know if someone you’re playing with is a cancer or rape survivor), then that seems to indicate that there’s a tension in the game’s goals and our own sensibilities. And, at that point, is winning a round of CAH really worth it?

Now, I’m not advocating that we should boycott these games or preach about their evils. After all, they are games, and they are supposed to be lighthearted and fun. But when some of the decisions we make in games go beyond the scope of the game and reveal something about our own morality and nature, then maybe we ought to think more carefully about their consequences.