We are delighted to welcome back Paizo as a sponsor again this year! They graciously provided several copies of their Pathfinder Beginner Box to early registrants.

Pathfinder is a fantasy roleplaying game (RPG). The full game can be played with 2 to 5 players, and could be adapted for more. One player is the Game Master (GM) who tells the story and plays any monsters or other non-player characters (NPCs). The other players play as various races and classes of adventurers (think Lord of the Rings: human ranger, elven archer, etc). Playing time for a single adventure usually takes a few hours. A campaign may take many hours over multiple meetings.

The Beginner Box is a great way to introduce someone to Pathfinder and roleplaying games in general. The Pathfinder Core Rule Book is 576 pages long, which can be a little intimidating to someone who has never played an RPG before. This Beginner Box has a 64-page guide for the players and a 96-page GM guide which is a lot more manageable for first-time players.

The player’s guide takes you through everything you need to know to create your own character and the basics of how to play the game. It is full of helpful diagrams and bold boxes that explain how the mechanics of the game work, without getting bogged down in details.

There are also a number of pre-made characters for included people who want to just jump right into playing without creating their own character. However, one of my personal favorite things about the Beginner Box is the inclusion of the blank character creation sheet. There are a lot of versions of character sheets out there and everyone has their favorite, but for a beginner who has never played an RPG before, the one included in the Beginner Box is incredibly well laid out. The guide walks you step-by-step through creating your character and makes it clear where all the information needs to go on your character sheet by including letters on both the sheet and in the player guide. Players won’t get lost filling out the character sheet… they may get lost in their adventure though. That’s up to the GM.

The GM guide has a pre-written adventure that takes the GM though all the steps of running an adventure. The adventure has a number of situations and combats that allow the GM to learn how to handle a number of situations. Even if someone has been a player for a while and wants to try their hand at GMing, the GM guide and the pre-written adventure would be a great first place to start. The rest of the guide has a ton of information to help the GM create their own adventures.

This box contains enough content to get players and GMs up and running and playing right away as well as enough resources for them to later upgrade to the full set of rules and scenarios available.

The box also contains a flip-mat which is double-sided. One side depicts a pre-made dungeon map. The other side features a dry-erase sheet with a grid of one-inch squares on one side. GMs may use the mat to draw out their own rooms and dungeons.

There is also a large collection of cardboard mini figures which can be used to represent players characters, as well as the creatures and other NPCs with whom they interact.

The box also includes a set of 7 polyhedral dice. I would recommend purchasing a few extra sets of dice to add to the box so that players and the GM can each have their own set to roll. Dice are readily available at your local game store, on Paizo’s website or on Amazon. 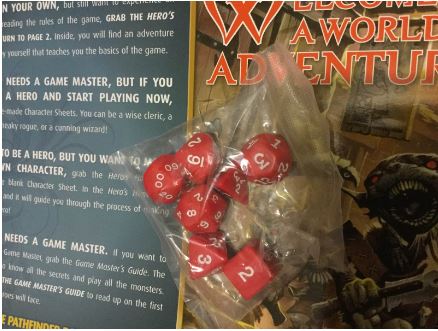 The box is a great single item that patrons can check out or use in the library to get started with RPGs.

For International Games Day a great way to incorporate the box is to have members of the Pathfinder Society come to the library to teach and help run some games.  The Pathfinder Society Organized Play is a worldwide group of players and GMs that play in pre-written adventures with an overarching story line. They have volunteers who help to organize and run games in places like game stores and libraries. You can find your local contact on the Pathfinder Society section of the Paizo website.

Roleplaying games are a great way to get people telling stories and using their imaginations while working together to solve problems such as defeating dragons. The Pathfinder Beginner Box is a great first step towards incorporating RPGs into your library.