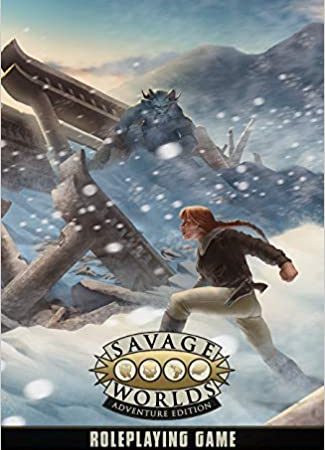 The Savage Worlds role-playing game was initially published in 2003 as a generic/simplified gaming system to be used with different world settings and stories. It’s been through a few system revisions and updates over the years since that time and has been previously highlighted here in a review of Savage Worlds Deluxe. Since that time the most recently published version of the game is called the Savage Worlds Adventure Edition or the “SWADE Edition” by the players of the game. The SWADE Edition came out in 2018 after receiving a phenomenal response from backers of the proposed game line on Kickstarter. When launched, the game system was fully funded in under 5 minutes. Among the changes made to the system, SWADE introduced changes to tests of will, support rules for players to work together, chase rules, changes to the multi-action rules and doing away with some stats that were considered redundant.

Player characters (PCs) are created with a point-based system and points allotted determine the dice that are rolled to resolve skills or actions taken. PCs, and certain non-player characters, are considered “Wild Cards” in the game and every action gives them a “Wild Die” in the form of an extra D6 that can be rolled along with their stat roll, taking the highest of the results. If any dice result in their maximum number they “explode” or “ace” and are rolled again with the result added to the first roll.

Characters start each game session with a certain number of Bennies, which players can use to reroll dice (except in a few situations) and redraw a card from the Action Deck (Which is a Poker Deck used to determine the combat order.). Additional bennies may be given as reward during game sessions by the Game Master (GM). A GM may also choose to let players draw from an Adventure Deck at the start of a game session. These cards allow the player to take a special action or influence the course of the game through their characters in unique ways.

The mechanics of the SWADE edition are largely the same across the multiple play setting possibilities. There are published settings available for nearly every genre including Deadlands (Steampunk, western horror), The Last Parsec and Flash Gordon (both space settings), Rippers (Victorian horror), Rifts (Multidimensional Cross-Genre), Weird Wars (historical battles) and their most recently added version of Pathfinder (epic fantasy). It is also a system that applies well to a customized setting, for the GM who enjoys building their own world.

I can say that this game system is a solid choice for library programming. I have several years of experience playing with this system at my own personal gaming table, but in addition I have utilized it in programming within my own library for over three years now. With its flexibility and compatibility within online tabletop platforms such as Foundry Virtual Tabletop, we were able to maintain our gaming program for tweens and teens virtually through the months that the library was closed in 2020 and during the period where we were not having in-person programming. We have since transitioned to using the system for in-person gaming. The cost of the game is reasonable, with there being fewer books than some of the other RPG systems and while their official Bennies, Adventure Deck, counters and Action Cards are very nice, they can also be substituted for other things that might be easier to obtain which is great for younger gamers.

Jennifer Taylor is the Teen & Adult Services librarian for the Hagerstown Public Library in the scenic small town of Hagerstown, Indiana where she has worked for almost 9 years, developing a circulating board game collection and multiple successful tabletop gaming programs. She is a “2nd Generation Gamer” determined to teach as many others as she can – be they family, friends or complete strangers – the joys and benefits of gaming, particularly RPGs.